One trade idea that would fix Cubs' bullpen problem 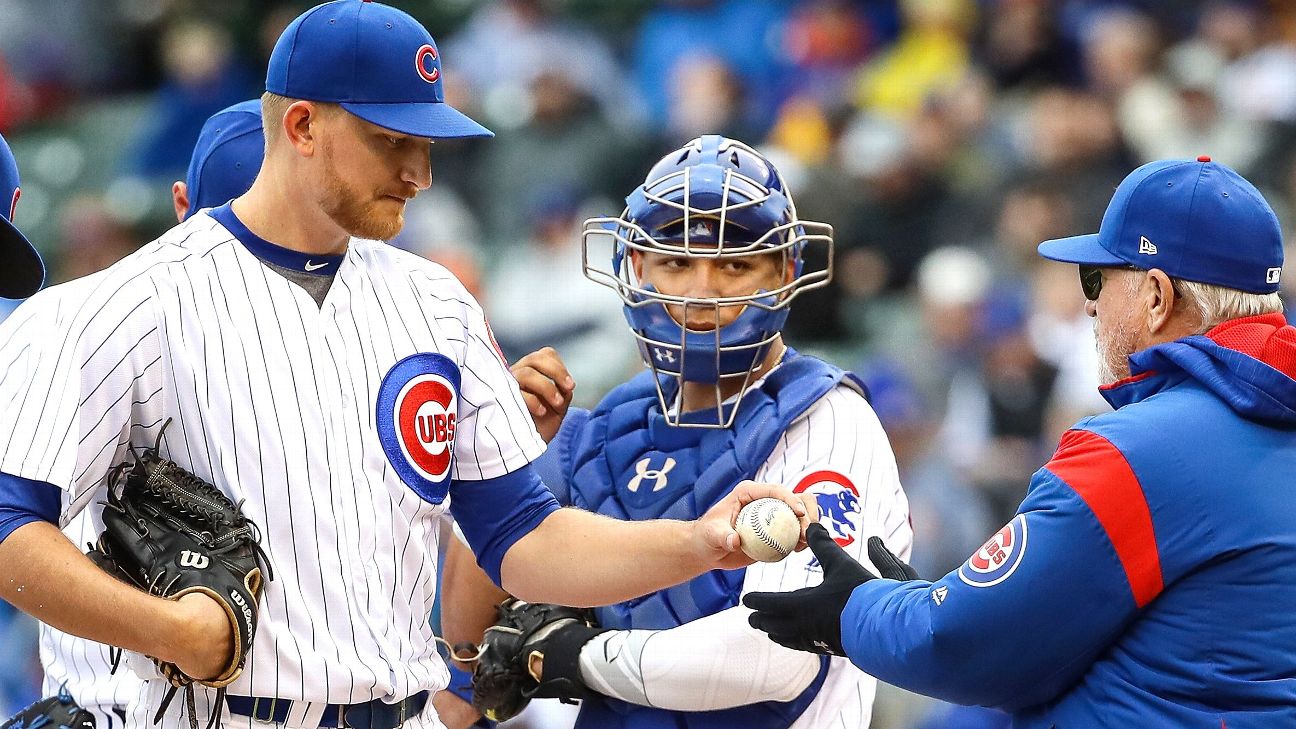 CHICAGO -- Weekend news of Chicago Cubs closer Brandon Morrow's setback in his recovery from offseason minor elbow surgery can't come as a surprise to anyone who has followed the right-hander's career.

In fact, there aren't any injuries that can be considered minor for the veteran. Tuesday will mark the 730th day he has spent on the injured list in his career. That spans nine stints, including 149 days as a Cub.

Where does the team, now 10-10 on the season, go from here, without its closer while dealing with an already thin bullpen?

At least the Cubs have learned to play without Morrow, considering he has been out since last year's All-Star break. But it's a thin line they've been walking while Pedro Strop has filled in as closer. Strop has been good -- despite blowing a save Sunday in the Cubs' 2-1 victory over the Arizona Diamondbacks -- but he has never done the job on a full-time basis. Strop has just 24 career saves spread across his 11 big league seasons. Plus, Chicago could use him in high-leverage moments earlier in games.

The organization knew all this as it began 2019. At best, Morrow was going to return in May, so the need to fortify the late-inning relief options was staring the Cubs in the face. But a lack of offseason funds prevented them from doing much about it. Brad Brach was their biggest addition. Early season ineffectiveness (from Carl Edwards Jr.) and injury (to Mike Montgomery) have only highlighted the team's bullpen needs, despite the season being just weeks old.

So far, there has been no indication that the Cubs have approached still-available free-agent closer Craig Kimbrel. Perhaps their budgetary constraints continue to hamper them. But there is another way for them to deepen their pen: via trade. The team has at least one trade chip it could use right away without taking much away from the major league roster: Montgomery.

First off, the left-hander is further than ever from his stated goal of being in a rotation, considering that Tyler Chatwood is ahead of him both in the long relief role and as a spot starter. Chatwood, last year's MLB leader in issuing walks, helped his cause immensely and shocked Cubs fans in throwing six shutout innings Sunday. Meanwhile, Montgomery is taking a good amount of time to recover from a lat injury, as he was stretched out to four innings in a rehab start for Double-A Tennessee on Monday. He could conceivably jump into someone's rotation if need be.

At the moment, Montgomery could be considered more valuable to another team than he is to the Cubs. Despite his 10th-inning save in Game 7 of the 2016 World Series, the 29-year-old has shown himself to be a much better long man -- or starter -- than a one-inning or one-batter reliever. And about 18 months ago, there were rumblings that Montgomery wanted a rotation spot with the Cubs -- or he wanted out. He was somewhat pacified after starting 19 games last season, but it's hard to imagine he will get those chances this year with Cole Hamels on board for a full season, Yu Darvish healthy and Chatwood showing positive signs.

Considering it is really early in the season to make deals, the Cubs would most likely need to trade with a team that is already clearly rebuilding and not concerned with the standings or holding on to its closer. They could even turn to their counterpart on the South Side of Chicago, offering Montgomery for righty Alex Colome. The White Sox aren't loaded in the rotation right now, so there's a good chance that they could find a spot for Montgomery at some point. He has two years of team control left after this season, while Colome has just one after 2019. Of course, Colome makes about $5 million more than Montgomery, so the Cubs might have to find the room to fit him in their payroll, but at least they aren't paying the full freight on the $7.325 million he's making this season.

In any case, those two pitchers could be the primary names in a deal between two teams that completed a blockbuster in 2017. The Cubs traded Eloy Jimenez for Jose Quintana that July, a trade that is benefiting both organizations, so there is recent precedent.

If not the Sox and Colome, then perhaps Shane Greene of the Detroit Tigers could be had as part of a larger deal, as he's off to a good start. The Marlins are rebuilding and might have an arm or two to sell. Same goes with the Mariners, who already unloaded Colome and Edwin Diaz this past winter -- and that is where Montgomery came from. The bottom line is that Montgomery's value is going to get only worse the more he is considered a short-outing reliever instead of a starter -- and his numbers don't look very good in that role, either.