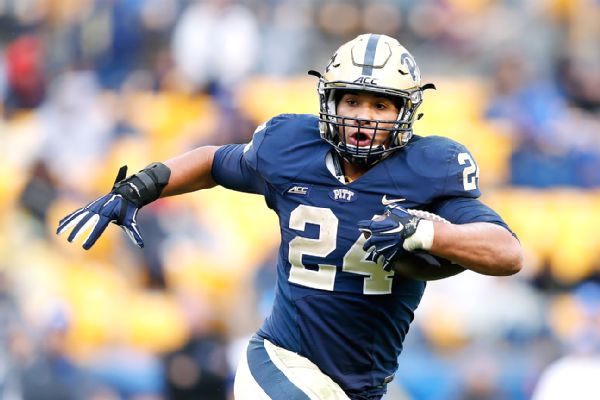 Pittsburgh Panthers running backJames Conner-- who rushed for 1,060 yards in 2016, one season after being diagnosed with Hodgkin's lymphoma -- has declared for the 2017 NFL draft.

He received the2016 Disney Sports Spirit Award, which recognizes college football's most inspirational figure, on Thursday.

Conner revealed his cancer diagnosis last December. He completed 12 chemotherapy sessionsand returned to the field in September, going on to become a first-team All-ACC selection. In addition to his rushing totals, he also had 20 catches for 299 yards and four touchdowns -- all career-high marks.

"I don't know if mere words can adequately express how I feel about James Conner," Pitt coach Pat Narduzzi wrote on Twitter. "His strength, his courage and his kindness have impacted all of us beyond measure. I'm forever grateful to be part of his life these past two years."

Conner's 56 career touchdowns are the most in ACC history, and his 3,701 career rushing yards rank second in Pitt history behind Tony Dorsett. According to ESPN Stats & Information, Conner's multiple rushing touchdowns in 15 gamesranks second among Power 5 conference players over the past four seasons.

He was the 2014 ACC Player of the Year, but he tore his MCL in the 2015 opener and missed the remainder of the season.