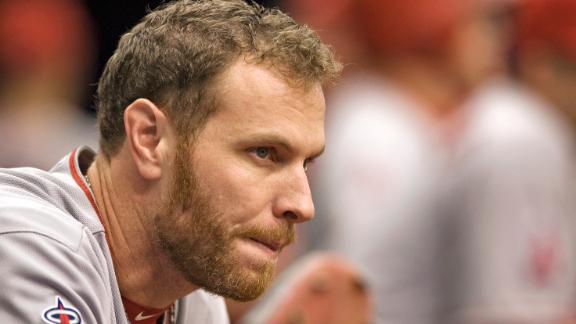 The decision about whether Los Angeles Angels left fielder Josh Hamilton should enter rehabilitation will be made by an arbitrator after a four-person disciplinary committee deadlocked, a source told the Los Angeles Times.

Hamilton suffered a drug relapse involving the use of cocaine and alcohol in the offseason, according to an ESPN source and media reports, and met last week with Major League Baseball officials in New York.

The commissioner's office and the MLB Players Association each appointed a lawyer and a physician to the committee, which determines whether the drug policy was violated and a course of treatment, according to the Times report.

The committee deadlocked on the course of treatment, necessitating the involvement of the arbitrator, the source told the Times.

On Friday, a source told ESPN's Tim Keown that Hamilton's relapse involved alcohol and a one-time use of cocaine, and that when Hamilton realized a drug test, which is administered three times a week, would come out positive, he self-reported his relapse.

Hamilton has a well-documented history of substance-abuse problems dating to his days in the minor leagues, when he was suspended from baseball from February 2004 to June 2006, for issues related to cocaine and alcohol addiction.

One of the conditions of Hamilton's reinstatement in 2006 was that he undergo drug testing three times a week. He had alcohol relapses in 2009 and 2012, bouncing back in between to make back-to-back trips to the World Series with the Texas Rangers and win the 2010 American League MVP award.

He also took off the 2003 season, citing personal reasons. He did not play professional baseball from July 2002 to July 2006.

He signed a five-year, $125 million deal with the Angels before the 2013 season.

The arbitrator's decision on a rehabilitation program will affect the $25 million he is owed this season, according to the Times report. He would be paid his full salary for 30 days and half his salary for the next 30 days ($6.2 million total) if in rehab. He would not be paid if suspended and not in treatment.

In addition, MLB is deciding whether to classify Hamilton as a fourth-time offender, the source told the Times, which could increase a suspension from 50-75 games to at least one full season.

Hamilton, who underwent shoulder surgery last month and is expected to be out until at least May, has not been with the team at spring training in Arizona. The Angels have permitted Hamilton to stay at a friend's house in Houston while he rehabs from the surgery, even though players typically stay with their teams in those situations.

"What I hope for is support for Josh," Clark told the Times. "There are always baseball concerns. There are, more importantly, life concerns. We have protocols in place to handle the baseball-related issues. But I'm hopeful that anyone in the baseball family who finds himself in a tough spot gets support as a person beyond baseball."