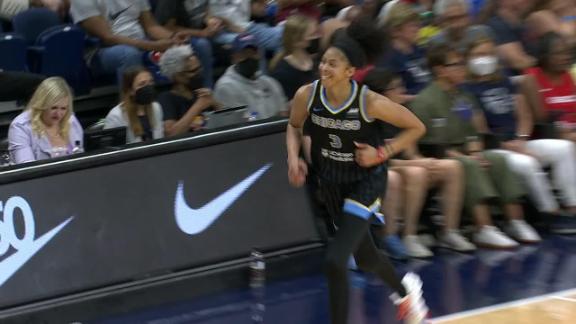 WASHINGTON -- - Candace Parker finished with her second career triple-double and the Chicago Sky pulled away in the second half to beat the Washington Mystics 82-73 on Sunday.

Parker totaled 16 points, 13 rebounds and picked up a 10th assist on a basket by Allie Quigley with 21.2 seconds remaining.


It was the 12th triple-double in WNBA history. Parker joins Sheryl Swoopes and Courtney Vandersloot as the only three players to accomplish the feat twice.

"It means a lot," Parker said. "To be in the company with Sloot who does it on a regular basis and will end up leading the league in assists. And Sheryl Swoopes, I grew up watching her play and idolizing her. To be in that company. I realize there are more that are coming behind me. Hoping coaches are watching post players, point forwards, that's where it's at."

Parker was the sixth player to post a triple-double when she pulled it off in 2017 against the San Antonio Stars. Sabrina Ionescu of the New York Liberty was the last to record a triple-double, accomplishing the feat in May of 2021 against the Minnesota Lynx.

Ariel Atkins had 20 points to lead Washington (5-2), which led 42-38 at halftime before being outscored 23-13 in the third quarter. Elena Delle Donne pitched in with 17 points, seven rebounds and three steals for the Mystics, who fell a game behind first-place Las Vegas with the loss. Shakira Austin scored 14.