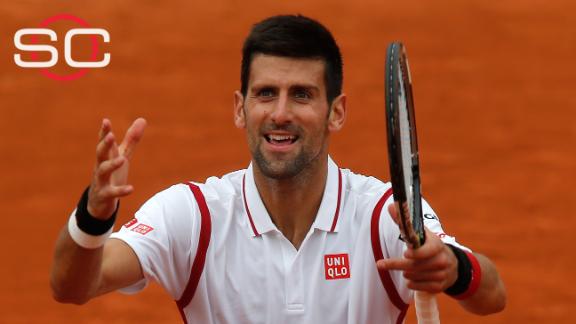 A record nine-time champion at Roland Garros, Nadal has won 200 of 230 matches in majors, a winning percentage of .870. Only seven other men have earned that many victories at Grand Slam tournaments; Roger Federer, who is missing from this year's French Open because of injury, holds the record of 302.

The fourth-seeded Nadal has 14 Grand Slam titles -- tied with Pete Sampras for second most behind Federer's 17 -- including a record nine at Roland Garros.

"I think this year I played better than last year," said Nadal, who lost to Novak Djokovic in the quarterfinals last year, ending his 39-match winning streak at Roland Garros.

"I've been able to play some really good matches against the best players in the world. I'm very happy to be competitive again."

This season, the Spaniard has been in better form in the buildup to the French Open, winning titles in Monte Carlo and Barcelona.

Nadal wasn't the only player adding milestones to his résumé Thursday.

Djokovic won his 50th match at Roland Garros by defeating 161st-rankedqualifier Steve Darcis of Belgium 7-5, 6-3, 6-4. The current top-ranked player, who overcame 42 unforced errors on a windy afternoon, became the seventh man to reach the milestone at the clay-court tournament.

The other men with 50 victories at the French Open -- Nadal, Federer, Guillermo Vilas, Ivan Lendl, Andre Agassi and Nicola Pietrangeli -- all won the championship at some point.

Djokovic, who has made it to the final three times in the past four years but lost each time, has a 50-11 career record here. If both continue their winning ways, Djokovic could wind up meeting Nadal in the semifinals.

And with a victory over Marcos Baghdatis in the second round, Jo-Wilfried Tsonga would become only the third Frenchman with 100 wins in Grand Slam tournaments.

In other matches, seventh-seeded Tomas Berdychpicked up a 6-1, 2-6, 6-2, 6-4 win, keeping Malek Jaziri from becoming the first Tunisian man in 53 years to reach the third round (Mustafa Belkhodjia, 1963).

Also making it through to the third round were No. 13 Dominic Thiem, No. 14 Roberto Bautista Agut and No. 25 Pablo Cuevas, while No. 20 Bernard Tomic and No. 26 Joao Sousa were eliminated.