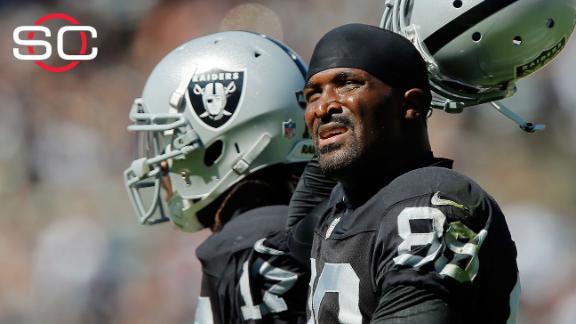 The Oakland Raiders are planning to release wide receiverJames Jones, who led the team in receptions in 2014, after finding two new starting receivers in April.

The Raiders signed veteran Michael Crabtree from San Francisco on April 13 and then used the No. 4 overall pick on Alabama receiver Amari Cooper in the first round of the draft last Thursday night. Cooper and Crabtree are both expected to start.

The Raiders signed Jones, a former Green Bay Packer, to a three-year, $10 million deal in 2014 to bring him back to his native Bay Area. CSN Bay Area reported early Monday that Jones said by text he was being released. A league source confirmed to ESPN that the team is expected to cut Jones.

The Raiders, who have about $20 million in remaining salary-cap room, will save about $3.4 million in cap space by releasing Jones.

Jones, 31, will be the seventh veteran cut by the Raiders this offseason, and the fourth such player acquired by Oakland in the last year.

Jones was valuable for Oakland last season, with 73 catches for 666 yards. He was rookie quarterback Derek Carr's favorite target, especially on third down, when he had 31 catches.

Meanwhile, middle linebacker Miles Burris wrote on Instagram on Monday morning that he is no longer a Raider. Burris was a fourth-round pick in 2012, Reggie McKenzie's first as Oakland's general manager. Guard Tony Bergstrom (third round) is the only draft pick left from that class and was a healthy scratch all last season.

Burris started all 16 games in 2014 and had 109 tackles. However, Burris, who was entering the final season of his contract, was replaced in the starting lineup by free-agent pickup Curtis Lofton. Oakland also drafted Ben Heeney out of Kansas in the fifth round.