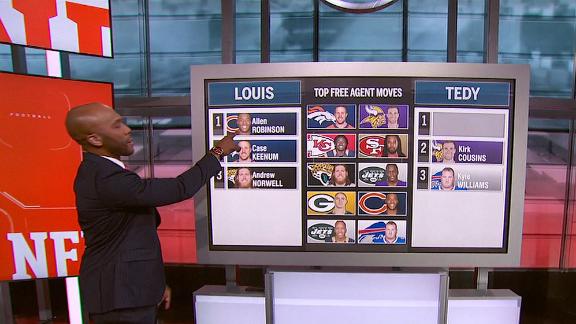 With the major 2018 NFL offseason quarterback movement having run its course even before free agency officially began Wednesday, we consider which QBs around the league stand to benefit from the initial wave of roster activity.

Three jump out off the top, and we will update this file as warranted.

Cousins' fully guaranteed $84 million deal is a good place to start. One longtime contract negotiator thought Green Bay'sAaron Rodgers could ask for at least $100 million fully guaranteed as a result. This negotiator thought Rodgers' agent could plausibly ask for five years and $150 million, with all of it fully guaranteed. Why not? Cousins will be able to hit the market in three seasons, and the Vikings will have to think hard before making him a three-time franchise player. Great for him.

The move from Washington to Minnesota should benefit Cousins in additional ways.

Winning should be easier with the Vikings' defense, which has ranked third in ESPN's efficiency metric over the past three seasons (Washington was 22nd). Minnesota's defensive performance since 2015 was good enough for an average team to win about two-thirds of the time, compared to about 45 percent of the time for Washington's defense over the same span.

A study I produced on quarterbacks after the 2017 season ranked them by how many points they needed to score to win their starts. The median figure was 25 points for Cousins, tied with Andrew Luck and Derek Carr for the most since 2012 among quarterbacks with at least 48 starts over that span. The median was 17 points needed to win for the Vikings' quarterbacks last season. Washington scored at least 17 points in 44 of Cousins' 57 starts (77 percent).

Cousins gains solid wide receivers in Stefon Diggs and Adam Thielen after playing last season with a group that was cobbled together and fluid all season. Dalvin Cook is returning to the backfield. Cousins is guaranteed to play at least nine games indoors each season, eight in Minnesota and one in Detroit. That is up from one (Dallas) when he was with Washington. While Rodgers provides a formidable rival within Cousins' new division, Cousins will be leaving an NFC East featuring the defending Super Bowl champions and a team with lots of potential in Dallas.

Signing with Minnesota is not quite a sure home run for Cousins. His predecessor, Case Keenum, did a terrific job masking issues on the Vikings' offensive line by moving to avoid sacks. Cousins could conceivably have issues if the protection does not improve. There is also some coaching uncertainty with new coordinator John DeFilippo becoming a primary playcaller for the first time. All in all, however, free agency has been a big win for Cousins.

Brees' willingness to take a sub-market contract from the Saints this offseason put the team in better position to build around him. Once Brees signed, New Orleans quickly added cornerback Patrick Robinson and linebacker Demario Davis to a defense that was already on the rise.

The Brees-era Saints have averaged 11.5 wins per season in the six seasons they've allowed fewer than 22 points per game (including 2017, when they were 11-5 while allowing 20.4). New Orleans has allowed at least 24 points per game in its six other Brees-era seasons, finishing 7-9 five times and 8-8 once -- records that would have been much worse had the Saints not had a future Hall of Famer behind center.

Could Brees have tested the market and signed elsewhere this offseason? Sure. Could he have tried to maximize his leverage? Yes again. Would he be much better off from a career standpoint staying in New Orleans? Absolutely.

He has made his money and is shooting for a championship. Re-signing with the Saints on a team-friendly deal gives Brees his best shot at accomplishing his goal. He sticks with Sean Payton, has a talented offensive supporting cast (including a solid line) and a defense that is on the rise, thanks in part to his contract.

Kendall Wright led the Bears in receiving yards with 614 last season. No other player on the team finished with more than 376 (Josh Bellamy). It was arguably the worst receiving situation in the league and a disaster for a young quarterback trying to find his way.

There are no guarantees that the newly signed Trey Burton, Allen Robinson and Taylor Gabriel will justify the Bears' investment in them during the initial stages of free agency, but at least Chicago is making an effort to address a glaring weakness.

Burton caught five touchdown passes for the Eagles last season within an offense similar to the one new coach Matt Nagy is bringing to Chicago. Robinson was available because he's coming off ACL surgery and because his former team, Jacksonville, has shifted to more of a run-oriented offense. He is 24 years old and should benefit from the fact his injury occurred in the 2017 season opener, giving him additional time to rehabilitate. 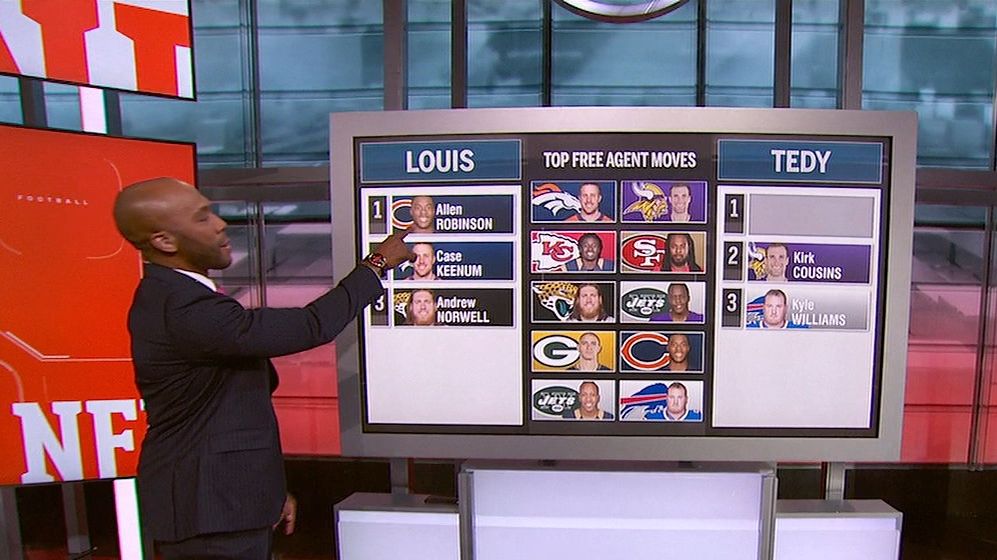