Real or Not? NL playoff races can't get any tighter 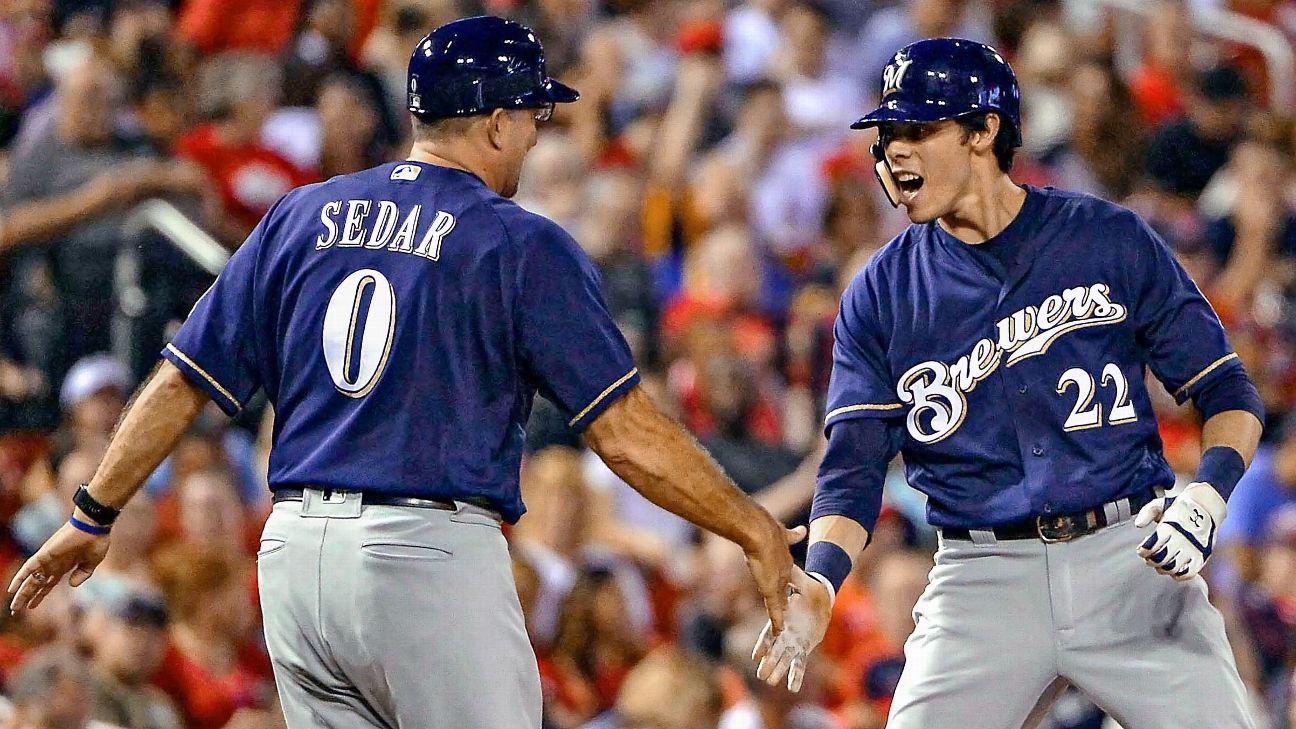 ESPN
By David Schoenfield
The final score suggests the Milwaukee Brewers ' 12-4 win over the St. Louis Cardinals was a blowout, but the Cardinals did have prime opportunities to get back in the game.

In the bottom of the fifth, the Brewers led 7-4. The Cardinals had scored one run and had the bases loaded with one out. Taylor Williams was facing Jedd Gyorko. Brewers manager Craig Counsell was sweating up a storm at the top step of the dugout. He had pinch hit for Gio Gonzalez in the top of the fifth -- with the bases loaded and one out, he tried to blow open the game, but Eric Thames struck out and Lorenzo Cain lined out. The Brewers had used nine relievers in a bullpen game the night before. Bullpenning is great until you have to use everyone every game. Williams threw a 2-1 fastball, Gyorko hit a grounder down the third-base line, Mike Moustakas fielded it, stumbled for a split second, tapped third base and threw out Gyorko for the inning-ending double play. Gyorko isn't exactly Vince Coleman going down the line.

In the bottom of the seventh, the score still 7-4, the Cardinals put runners at second and third with one out (a Matt Carpenter strikeout -- more on that in a second). Corey Knebel fanned Paul DeJong on three pitches. Marcell Ozuna walked to load the bases. That brought up Gyorko again and he flied out to right field. Rough night for Gyorko, who also struck out in the first with two runners on.

Anyway, the Carpenter strikeout came on a 2-2 curveball. Umpire Will Little made a bad call -- it was up high and just off the plate. Carpenter had every right to question the call. Little let Carpenter have his say. Carpenter walked away. Then Carpenter turned back around and barked something else. He was ejected and then manager Mike Shildt was ejected. I didn't like the ejection given the bad strike call and the importance of the game, but Little did give Carpenter a bit of a long leash and then he took it too far. You can't argue balls and strikes.

As livid as Cardinals fans were, that didn't decide the game. For the second game in a row, their playoff spot on the line, they played a terrible game. Gyorko didn't drive in any of those eight runners on base. They made three errors. Austin Gomber gave up two home runs in the first inning. The bullpen imploded.

On the other side, Christian Yelich hit a bases-loaded triple in the fourth and then iced the game with this three-run homer in the ninth:

That was the first six-RBI game of Yelich's career. He's slugging .743 in the second half. He has 47 RBIs in 48 games in August and September. Sorry, Javier Baez, but Yelich is looking like the NL MVP.

Elsewhere in the NL ... The Colorado Rockies moved past the Cardinals for the second wild card with a 10-3 win over the Philadelphia Phillies, the Rockies' fifth win in a row. David Dahl hit a three-run homer in the third and the Rockies pounded out 14 hits. At Wrigley, Chris Archer tossed six scoreless innings for the Pittsburgh Pirates as they blanked the Chicago Cubs 6-0. In Arizona, a frustrating loss for the Los Angeles Dodgers. They tie it up at 3-3 in the top of the ninth on Chris Taylor's RBI double with no outs, but he's left stranded. Eduardo Escobar then walked it off for the Diamondbacks with a home run off Kenta Maeda. The NL Central and NL West leads are down to a half-game apiece. Outside of the Atlanta Braves, already in as NL East champs, here's what the rest of the NL looks like:

The Cardinals now need some help. The Rockies still have two more games against the Phillies, and that still feels like a four-game sweep in the making. The Cubs' offense continues to struggle in September, hitting a lackluster .230/.293/.355. Kris Bryant also left Tuesday's game with a bruised wrist after getting hit by a pitch. The Brewers get John Gant in Wednesday's series finale and he lasted just 2 innings in his previous start, walked six in the one before that and walked five two starts before that one. The Dodgers send Ross Stripling and the bullpen out against Zack Greinke on Wednesday. All the pressure is on them.

Drama we shall have!

Max is one mad strikeout artist: Max Scherzer has won three Cy Young Awards and will lead the National League for a third straight season in strikeouts. And now he's a member of the 300-strikeout club:

This little nugget is remarkable:

Even though strikeouts across the majors have gone up 11 straight seasons, 300-strikeout seasons have become rare because pitchers don't throw enough innings. Scherzer's strikeout rate of 34.6 percent is seventh best of all time for a starting pitcher -- although it's behind Gerrit Cole's 35.1 percent rate this season. He's also the oldest pitcher to record 300 strikeouts for the first time.

Scherzer now has 2,449 strikeouts in his career, so that leaves him just 3,265 strikeouts behind Nolan Ryan. He needs to average only 326.5 strikeouts over the next 10 seasons to tie the record!

Random thoughts on the Phillies: Midway during that Rockies win, an email from my editor: "Odubel Herrera is worse in right field than he is in center!"

The other day, Jeff Sullivan of FanGraphs had an article pointing out that the Phillies have the worst total of defensive runs saved since Sports Info Solutions began tracking the metric in 2003. The Phillies are at minus-129 DRS -- compare that to the Diamondbacks at plus-17 (or the Braves at plus-56).

Maybe the numbers are off some; nobody is arguing that defensive metrics are perfect or exactly precise. But there's no denying the Phillies were an awful defensive team, without an obvious plus defender. While the Phillies were a feel-good story for five months, I think they still have a lot of tweaking to do in the offseason. Really, outside of Aaron Nola you wonder how they even stayed in the race so long. Mostly, the rotation stayed healthy (not including Jerad Eickhoff, who missed the entire season). They've had four starters make 30 starts and a fifth make 24. You can be mediocre simply by not being bad.

Anyway, they have to retool the defense. You start by moving Rhys Hoskins back to first base. That means trading Carlos Santana. He'll make $41 million the next two seasons and the Phillies would probably have to eat a decent chunk of salary to move him. The Mariners are one team who could use a first baseman with a solid OBP. If you sign Manny Machado to play third base, you've upgraded your defense there (less so if he's signed to play shortstop). J.P. Crawford takes over at shortstop. Then you find a good defensive outfielder in free agency or via trade.

That's a start. Learn from what the Braves have done or the Diamondbacks or the Cubs: Defense does matter.

Thank god he caught the ball: You sure you want to be a big league pitcher?

Astros win No. 100: They're the first team to win 100 in back-to-back seasons since the 2004-05 Cardinals, and the first AL team to do it since the 2002-04 Yankees. Winning 100 is hard. Keep an eye on Josh James, a September call-up who is making a push to be included on Houston's postseason roster. James allowed one run in five innings in the 4-1 victory over the Blue Jays, hits 98 mph with his fastball as a starter and 100 mph in relief, has a 2.57 ERA in 21 innings with 27 strikeouts. The Astros have plenty of arms so they may not need him, but he also has been starting all season so he could be the emergency long man out of the pen. And with the A's loss on Tuesday, the Astros clinched the AL West.

Anyway, a note on the Astros that researcher Sarah Langs of ESPN Stats & Information provided. They've now allowed 521 runs with five games to go. Since the AL went to the DH in 1973, the fewest runs an AL team has allowed in a non-strike season is 551 by the 1974 A's. Guess who won the World Series that year?