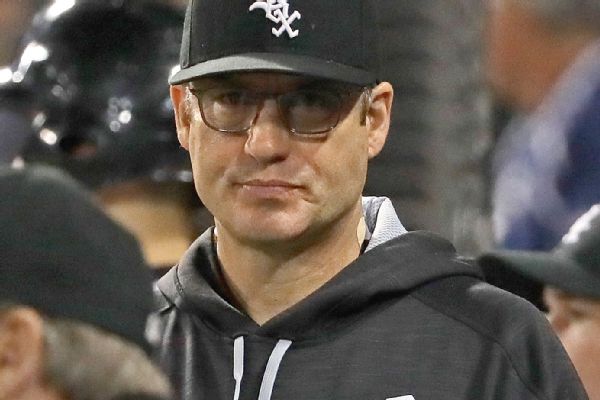 TheChicago White Soxare not expected to retain Robin Ventura as manager and will replace him with bench coach Rick Renteria, according to multiple reports.

The Chicago Sun-Timeswas first to report news of the White Sox's intended move.

Ventura is completing the final year of a deal that began before the start of the 2012 season.

In an odd scene after Chicago's 6-0 loss to the Minnesota Twins on Saturday night, general manager Rick Hahn declined interview requests, and White Sox players claimed they hadn't heard about the report or Ventura's status.

"We've been over this," Ventura said after the game. "I'll talk at the end of the year."

Hahn relayed a message through a team spokesman that he would answer questions at a news conference Monday scheduled by the team.

"You guys are telling me something I haven't even heard about," third baseman Todd Frazier said, adding that "I love Robin. I love him to death. He's a good manager, for sure."

Right-hander James Shields, who gave up two-run homers to Byron Buxton and Jorge Polanco to lose his major-league-high-tying 19th game, had high praise for the 49-year-old Ventura.

"He's one of the better managers I've been around, and I've been around some really good ones," Shields said. "To be honest with you, that's the first time I'm hearing this. But Robin is a good man, a good manager."

Earlier this season, Ventura said he wanted to return in 2017 despite a fourth straight losing season and five years without a playoff berth. But Ventura then backtracked on that statement after USA Today reported Wednesday that the front office wanted to retain him, but Ventura hadn't committed.

Ventura sidestepped numerous questions about the issue after the game Saturday and said he hadn't discussed his future with the players.

"No, I haven't talked to them about anything. We're still playing," Ventura said. "All the conversations I have with them are about playing."

Frazier praised the 54-year-old Renteria, who went 73-89 in one season with the Cubs in 2014. The White Sox hired him before this season.

"Rick's a great guy, man,'' Frazier said. "He's bilingual, which is great. He's been a manager before. But like I said, it's not my right to say anything. I haven't heard anything, and that's basically up to our brass, so I'm not going to get in trouble."

Saturday's listless defeat continued a theme of inconsistency surrounding this season's team, which started 23-10. The White Sox are 55-73 since.

"I feel bad that I wasn't able to do more for him. I know guys in here feel the same way," catcher Alex Avila said. "We were a team that was expected to win coming into spring training, and we didn't do that."