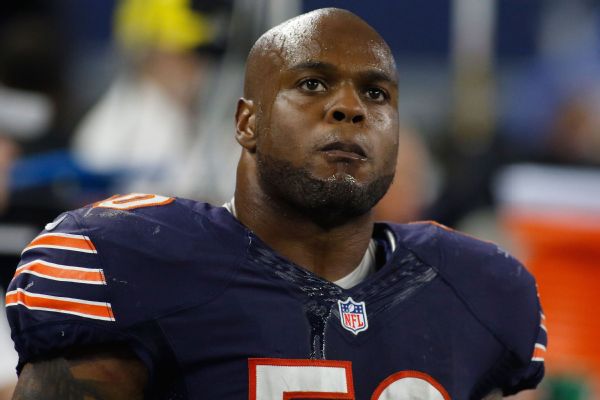 Fortunately for another man at the airport, Freeman was there to save him when he starting choking.

The linebacker saw Marcus Ryan shoot up out of his chair at the Salt Lick Taco Bar -- "like he had forgotten something," Freeman said -- and noticed the man was in distress.

"He went around the table and started to look a little frantic. I'm thinking, 'Man, this is odd. Maybe one of his kids walked off and he can't find his kid or something?'" Freeman told the Chicago Tribune.

An older woman unsuccessfully tried to perform the Heimlich maneuver on Ryan. Freeman said he rushed in like he was "ready to make a tackle" and successfully performed the maneuver.

"I grabbed him and tried to squeeze the life out of him," Freeman told the newspaper. "You've got to push in and up. So I did that and he started throwing up what he was choking on. I asked him if he was all right, and he shook his head like 'No!'

"I grabbed him again and hit him again with it," Freeman added. "And when I put him down the second time, his eyes got big. He was like, 'Oh my god! I think you just saved my life, man!' It was crazy."

Once Ryan regained his composure, the pair posed for a photo, which Freeman tweeted.

Freeman said it was his first time performing the life-saving maneuver.

"I've never done the Heimlich before," Freeman said. "I don't think I've had any training or anything. My mom's a nurse, and she had talked about it. So I just did what I heard you should do. I guess it worked."

The linebacker noted that Ryan went back to finish his meal.

"I guess that was some good brisket. He wasn't about to let that go to waste," Freeman told the Tribune. "You can't get between a man and his brisket. I get it."