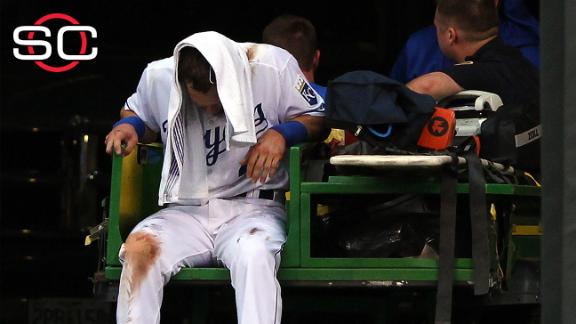 KANSAS CITY, Mo. -- The AL Central-leading Kansas City Royals will be without Alex Gordon for at least eight weeks after the All-Star outfielder sustained a severe groin strain while tracking down a fly ball Wednesday night against Tampa Bay.

Gordon, who was on crutches but will not need surgery, has a "grade two-plus strain" and will not participate in any baseball activities for several weeks, manager Ned Yost said Thursday.

The AL All-Star selection crumpled to the fieldnear the warning track in the fourth inning of Wednesday night's win over the Raysand lay there for several minutes, eventually needing a cart to leave the field. He later underwent an MRI.

"Put it this way, when I really screw up in a game, I'll wake up in the middle of the night and have this pit in my stomach, right?" Yost said. "I woke up last night and had that horrible feeling in my stomach, and I said, 'Wait a minute, I didn't screw up. And we're not on a losing streak.' And then it hit me -- Alex Gordon. So it runs deep."

Yost is unsure if Gordon will be able to return before the end of the regular season.

"We have no way of determining that," Yost said. "We just have to go week to week."

Gordon, who received more than 10.6 million votes in earning his third All-Star selection, is hitting .279 with 11 home runs and 39 RBIs this season.

Filling Gordon's void in the Royals lineup wasn't all Yost had to worry about: He is also the manager of the American League team for Tuesday's All-Star Game. After spending Thursday morning pondering replacements for Gordon, Yost choseoutfielder Brett Gardnerof the Yankees -- one of the five "final vote'' candidates.

Not only is Gordon, a four-time Gold Glove winner, one of the best defensive players in baseball, he was also the Royals' hottest hitter. He had seven hits, reached base eight times and drove in six runs during a doubleheader sweep of Tampa Bay on Tuesday.

"It's just devastating," said Jarrod Dyson, who started in Gordon's place Thursday. "I got a chance to talk to Gordo before I left the clubhouse. We just wish him the best. Our prayers go out to the guy. We stick together around here."

Yost said that Dyson and Paulo Orlando would handle the vacant spot in the outfield, though the Royals also still could make a move prior to the trade deadline.

Ventura has been on the disabled list with ulnar neuritis, a condition that caused numbness in his pitching hand.

The Royals are also due to get Jason Vargas, out with a left flexor strain, back from the DL after the All-Star break. He reported no problems after a 60-pitch simulated game Wednesday, and will make a rehab start Monday for Double-A Northwest Arkansas so he can face live hitters.

Kurkjian: Gordon injury a really bad situation
Tim Kurkjian explains how the Royals will miss Alex Gordon's offense and defense while he is out with a severe groin strain.