Sack attack: Mack wants to be best LB of all time 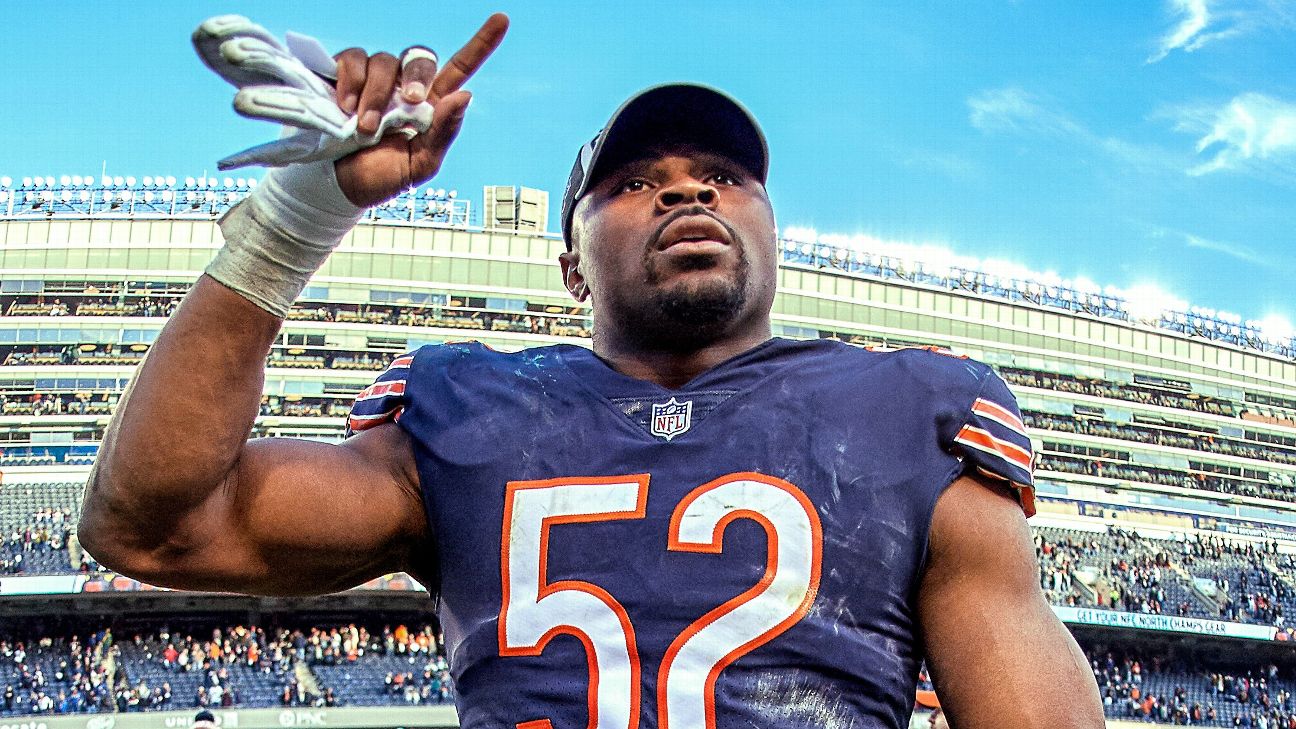 LAKE FOREST, Ill. -- After four straight seasons of double-digit sacks, former NFL Defensive Player of the Year Khalil Mack has set his sights on being the best pass-rushing outside linebacker of all time.

"I want to be the best to play the game," Mack said after the Chicago Bears' OTAs on Wednesday. "I mean, you got L.T. [Lawrence Taylor]. You got Derrick Thomas. You got special, special guys that have played this position, and that's all you can do, is kind of chase."

Drafted by the Oakland Raiders with the fifth overall pick in the 2014 NFL draft, Mack earned the reputation for being one of the league's most feared pass-rushers with 40.5 sacks over his four seasons with the Raiders.

But a contract dispute with the Raiders paved the way for the 2016 NFL Defensive Player of the Year to be traded to the Bears prior to the start of the 2018 regular season.

Mack, who signed a new six-year deal with Chicago that guaranteed him $90 million, helped the Bears' defense become one of the league's best.

In 14 games with the Bears, Mack recorded 47 tackles, a team-high 12.5 sacks, 11 tackles for loss, 6 forced fumbles, 2 fumble recoveries and an interception, which he returned for a touchdown.

Mack was voted NFC Defensive Player of the Month for September and earned All-Pro honors. Expectations are even higher in 2019 for Mack, who didn't have the benefit of attending any of the Bears' offseason program or training camp before joining the team.

This offseason, Mack has been a fixture at Chicago's voluntary workouts.

"Two weeks, one and a half weeks before the first game of the year is not really prepared, in my opinion. But I tried to do my best last year. It's a whole new year. Hopefully it's an even better year."

For coach Matt Nagy, Mack's presence at voluntary offseason workouts sends a message to the rest of the Bears' locker room.

"It's amazing if you think about it -- how much he affected everybody and multiplied us last year," Nagy said. "Not just defense, but coaches, offense, everybody. Now that he's here, you get to see that he does things by his actions. And so he continues to do that, and I think he shows some of these younger kids that want to be leaders that there are different ways of doing it. It's by showing up every day, it's working hard and it's making plays.

"When you have a player of his caliber that just shows up, there's no, 'Ah, well, it's a nag' or anything like that. You don't hear that. He works out every day just like all these guys and that just speaks volumes to who our players are. Khalil would be the first one to tell you it's something he's always done. He's not changing anything that he's done."
Report a correction or typo
Related topics:
sportsespnnflchicago bearskhalil mack
Copyright © 2022 ESPN Internet Ventures. All rights reserved.
TOP STORIES
LIVE: Tornado Warning in effect for Kane County until 4 PM
Uvalde school shooting: What we know about 19 kids, 2 teachers killed
Abbott slams Chicago gun laws: 'Not a real solution'
'Tyson the Bison' captured in north suburban forest preserve
LIVE: TX school shooting leaves at least 19 children, 2 adults dead
Illinois reports 6,406 new coronavirus cases, 8 deaths
Beto O'Rourke confronts Texas gov. at Uvalde shooting press conference
Show More
City Council approves Lightfoot's plan for Chicago casino
Texas school shooter bought 2 rifles within days of turning 18
Hyundai recalls 239,000 cars for exploding seat belt parts
Man set on fire in downtown Chicago: CPD
Teen boy charged in shooting near CTA Red Line: CPD
More TOP STORIES News