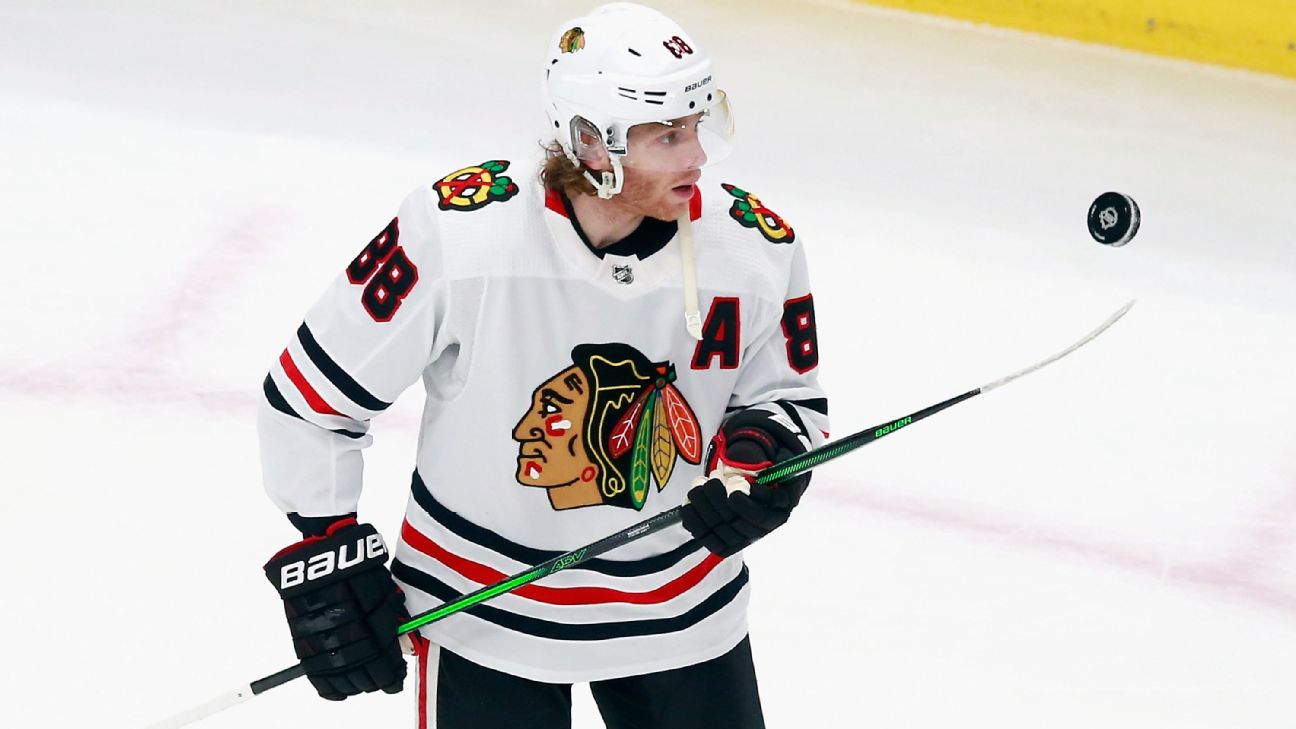 The absences were felt immediately on Sunday night. Lucas Raymond had three goals and an assist as the Detroit Red Wings kept the Blackhawks winless with a 6-3 decision at United Center.


Tyler Bertuzzi added a goal and two assists as Detroit bounced back nicely after a 6-1 loss at Montreal on Saturday night. Carter Rowney and Vladislav Namestnikov also scored, and Alex Nedeljkovic made 32 saves for the Red Wings, who extended their rivals' misery.

Short-handed Chicago dropped to 0-5-1 in a nightmarish start that no one saw coming for a team with playoff aspirations. The Blackhawks have yet to lead this season: At 360 minutes, 57 seconds, it's the NHL's longest such streak to open a campaign since at least the 1979-80 season, according to Sportradar.

"We haven't found a way to generate any offense and get on the scoresheet, and when things go bad for us, it just seems to kind of snowball," captain Jonathan Toews said. "But, again, we only have ourselves to blame for that. So it's up to us to find solutions and find a way out of it."

Assistant coach Marc Crawford also was absent from the loss because of the protocol.

"I believe we have the makings of a good group," Chicago coach Jeremy Colliton said. "We haven't put it together yet, so we need to. I feel like we can play a brand of hockey and be a team that people in Chicago are proud of, but we got to deliver."

As the struggles continue, the fans appear to have taken notice. Sunday's loss was watched by a crowd of 19,042, which stopped the Blackhawks' sellout streak at 535 games. There were periodic boos the whole night, broken up by an occasional "Let's go Red Wings!" chant coming from a vocal group of fans in the upper deck.


Danny Wirtz, the chief executive officer for the Blackhawks, marked the end of the sellout streak with a statement thanking the fans.

"We're actively building toward more competitive play on the ice as well as an experience that invites fans back following the COVID-19 pandemic," he said. "But it's also important to note that we've set a number of goals to welcome new and more diverse audiences into Blackhawks hockey moving forward, and greater accessibility to tickets is a big part of that.

"This is a great opportunity to reassure fans both new and old that there is absolutely a seat here for them."

The COVID-19 protocols for the Blackhawks don't necessarily mean any of the players or coaches tested positive. They could have been deemed a close contact of someone who tested positive. General manager Stan Bowman said during training camp that the team was 100% vaccinated.

The Blackhawks host the Toronto Maple Leafs on Wednesday night.