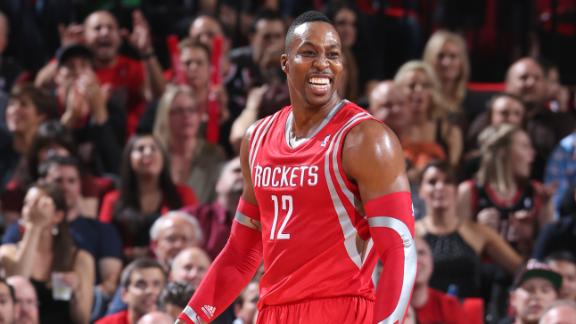 EL SEGUNDO, Calif. - Kobe Bryant and Dwight Howard clashed during their one-season stint as Los Angeles Lakers teammates in 2012-13. And Byron Scott believes he knows why.

"My outside perspective is Kobe is a real serious guy and wants to win championships," Scott, the Lakers' first-year head coach, said after his team's practice at their facility Monday. "I don't know if Dwight is that serious about it. I know No. 24 is. I think that probably was the clash."

Howard has faced the Lakers three times since joining the Rockets in July 2013, but because Bryant has missed those matchups because of injuries, Tuesday's game will mark the first time both players will face each other since Howard left Los Angeles.

Scott predicted that Howard would "love to beat the crap out of us."

Bryant said that Howard obviously would try to play well, but he dismissed the notion that the matchup meant more because of Howard's presence.

"Why would it?" Bryant asked, rhetorically.

Could they have overcome that difference? Scott wasn't sure.

"Probably so," Scott said. "I don't think there's one specific way that you can overcome it. I think there's probably a number of ways, but obviously both individuals have to be willing."

Lakers guard Jeremy Lin, who played with Howard and the Rockets last season, tried not to place blame on either side.

"One thing I have heard from both ends is [Howard] probably came back a little too early (from back surgery) and wasn't able to be himself," Lin added Monday. "Beyond that, I really don't know much of anything."

A recent ESPN The Magazine article quotes several agents and NBA personnel -- including Lakers insiders -- as saying that L.A. has been unable to attract top talent in free agency because players don't want to work with Bryant.

In the piece, a Lakers source was quoted as saying that Howard's issue with the Lakers was that "he saw one particular player play outside that scheme with carte blanche, with no accountability."

The source added: "These people who say Dwight couldn't handle the pressure of Los Angeles ... that's nonsense. L.A. was everything Dwight wanted. To be celebrated. To be among stars. To be among women of this caliber. To live, basically, in one big reality TV show. This was a perfect setting for him."

Howard left nearly $30 million on the table by departing the Lakers and signing with the Rockets as a free agent.