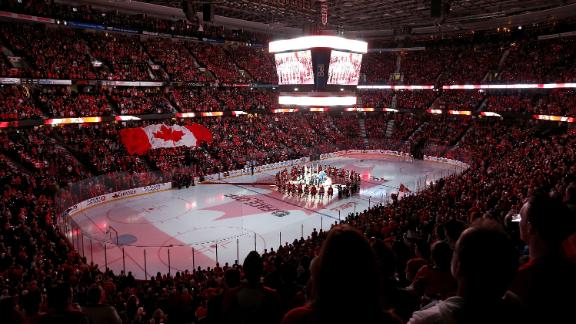 OTTAWA, Ontario -- Players on opposing teams stood shoulder-to-shoulder in a circle at center ice as hockey made a stirring return to Ottawa on Saturday night.

Fans, many wearing red and waving Canadian flags, paid their respects to Cpl. Nathan Cirillo and Warrant Officer Patrice Vincent as part of a poignant ceremony prior to the Senators' game against the New Jersey Devils.

Glow sticks were handed out to fans as they entered the arena, and they stood in place of candles while the home of the Senators hosted a public, national vigil.

It was the first hockey game in Ottawa since Wednesday's attack on Parliament Hill and the National War Memorial, where Cirillo was shot and killed. Vincent died in a hit-and-run attack Monday near Montreal.The Devils won in overtime 3-2.

"Tonight we have an opportunity to stand united as one," public address announcer Stu Schwartz said.

Members of Cirillo's division joined local first responders inside the circle of 40 players from both teams. With photos of Cirillo and Vincent on the arena video screens, the sellout crowd of 19,266 stood for a moment of silence that lasted 42 seconds.

What followed was a coordinated singing of the "Star-Spangled Banner" and "O Canada" between fans in Ottawa, Montreal and Toronto, led by Ottawa anthem singer Lyndon Slewidge. The emotional rendition of Canada's national anthem gave way to cheering, as fans -- some with Cirillo's name written on the back of their jerseys -- remained on their feet and applauded until well after the military and police personnel left the ice.

"There's a sense that you can move forward, I guess, and you hope that that's what people take out of it," Senators winger Bobby Ryan said earlier in the day.

The Senators were supposed to play the Maple Leafs on Wednesday night but the game was postponed due to the shooting attack. It will be played on Nov. 9.

"Hockey Night In Canada" opened the proceedings with a video montage featuring scenes from Ottawa, including the National War Memorial. References to Prime Minister Stephen Harper's Thursday speech to Parliament gave way to the message that Canadians "unite around this game because we always unite around the game."

Devils coach Pete DeBoer took some time Saturday afternoon between meetings to walk from his team's downtown hotel to the war memorial.

The Dunnville, Ontario, native was glad to be a part of Saturday night's ceremony.

"Any time you can get together when something like this happens, it's for the good," DeBoer said. "The healing process starts."

Downtown at the site of the attack, hockey was a part of the makeshift memorial. Amid the flowers, candles, stuffed animals and hand-written thank-you notes was a black Canadian Olympic hockey jersey.

Along with DeBoer, Devils defenseman Eric Gelinas also visited the site. Gelinas is from Vincent's hometown of Saint-Jean-sur-Richelieu, Quebec.

Gelinas and his Devils teammates eventually went on to a 3-2 overtime win over the Senators. But as much of North America watched, they stood almost arm-in-arm during the pregame ceremony in an apparent nod to a line in Harper's speech when he said: "In our system, in our country, we are opponents. But we are never enemies."

"I thought that was a great touch," said Dax Lanham, a 44-year-old Ottawa native who wore a white Canadian Olympic jersey to the game. "They're not all Canadians. They're Americans, they're Europeans. It's not just Canada and the U.S. uniting, it's the whole world uniting around one big circle."

Devils Beat Senators As Both Teams Honor Soldiers
After an emotional ceremony to honor the slain soldiers from a shooting in Ottawa, Jaromir Jagr scored the game-winning goal in overtime to give the Devils a 3-2 win over the Senators.
Related topics:
sportsespnnhlpatrice vincentnathan cirilloottawa senatorsceremonysensnew jersey devils
Copyright © 2020 ESPN Internet Ventures. All rights reserved.
More Videos
From CNN Newsource affiliates
TOP STORIES 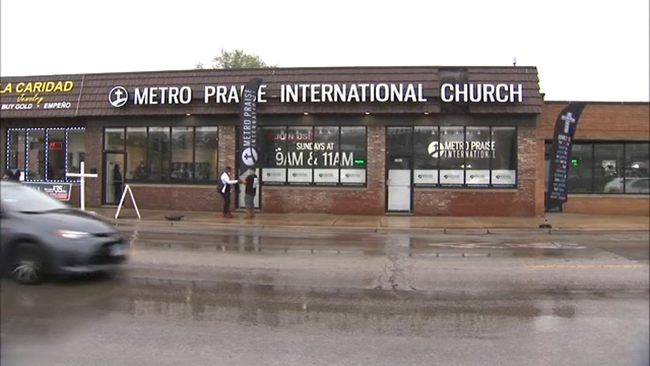