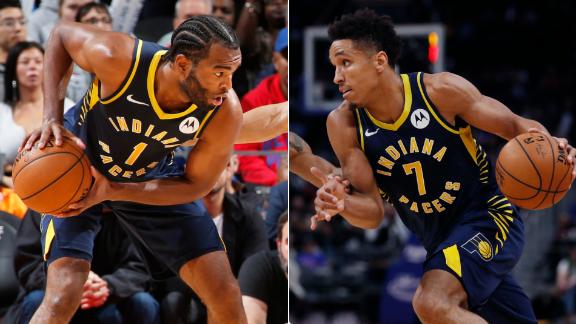 INDIANAPOLIS -- His sixth NBA season has been a slow transition in getting acclimated with a new team, so T.J. Warren admittedly was pressing too much.

On a Sunday night when the Indiana Pacers had a makeshift lineup with three injured starters sidelined, Warren adjusted well to playing a more prominent role with a season-high 26 points in a 108-95 home win over Chicago.

"It's definitely been a process," said Warren, acquired in the offseason after five years with Phoenix. "I'm just trying to figure out how I can fit in and where I can be effective on this team. It's a whole new system with guys who have been together for like a month and a half now. We're still learning each other."

Warren, a 14.4-point scorer with the Suns, was averaging 12.8 points for the Pacers (3-3) after a humbling 3-point effort on 1-of-8 shooting in a Friday home win over Cleveland. But this night the shots were falling from the outset as he scored 14 first-half points to help the Pacers take a 13-point lead at the break.

"It's more just him trying to find his rhythm and get a feel for where his opportunities are coming," said Pacers coach Nate McMillan. "We're still early. It's going to take some time with this group getting a feel for each other."

A Pacers squad already missing its best player -- All-Star guard Victor Oladipo has yet to make his season debut in his recovery from knee surgery -- was also without forward/center Myles Turner (ankle) and center Domantas Sabonis (calf contusion).

That meant McMillan was tinkering with lineups he hadn't even tried in practice, but they worked as the Pacers won their third straight game and sixth in a row against the Bulls (2-5).

"Guys have to be ready to step up and play when that opportunity presents itself," McMillan said. "I thought tonight, as a group, we did."

Point guard Malcom Brogdon had 22 points and seven of the Pacers' team-high 28 assists.

"Having Victor out, you know the type of player he is as an All-Star, and still being able to win games and put it together, it's been huge for us," Brogdon said. "But to have Myles and Domas out and still get this win, it's huge for our confidence."

Reserve forward TJ Leaf took advantage of extra minutes as a backup center with his second career double-double, 13 points and 15 rebounds. The third-year pro had entered with seasonal averages of 2.8 points and 2.5 rebounds.

"We've been the short-handed team that went out and scrapped it and junkyard-dogged it and beat teams that maybe we shouldn't have beaten," said Bulls coach Jim Boylen. "We haven't been the team that's favored very often. And maybe that's the lesson we've got to learn, that whether you're favored or not, or whether they're hurt or not, you've got to bring it."

"We've got to take advantage of opportunities like this," said Bulls reserve forward Thaddeus Young, who had 12 points. "I told the team in the postgame meeting this is what we call a trap game. We just didn't take advantage."

Bulls: LaVine joined select company on Friday in his 93rd game in bumping his career point total to 2,020. The only other Bulls to score more than 2,000 points in fewer games were Hall of Famer Michael Jordan (73 games) and Derrick Rose (86), according to Elias Sports Bureau.

Pacers: Rookie reserve center Goga Bitadze, drafted 18th overall, is making the most of his first extended playing time with nine points against the Bulls after scoring 10 against Cleveland on Friday. Prior to that, he had just two points in two games and did not play in two others.

At one point in the first half, the Pacers' lineup featured nothing but T.J.'s and Holidays with center TJ Leaf, forward T.J. Warren, forward T.J. McConnell, guard Justin Holiday and guard Aaron Holiday.

Pacers: At Charlotte on Tuesday night.