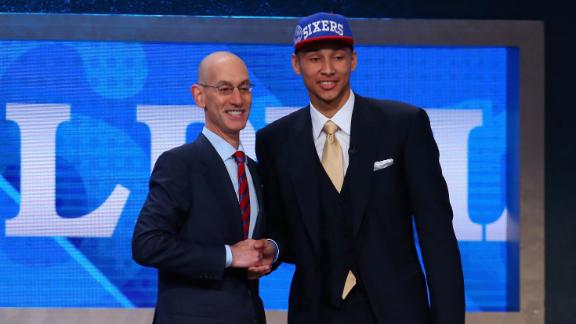 NEW YORK -- As a youngster growing up in Australia,Ben Simmonslooked up to Allen Iverson on an almost daily basis; Simmons even tried to look like Iverson.

Now, Simmons will be following in Iverson's footsteps after the Philadelphia 76ers made LSU's versatile forward the No. 1 overall pick in the NBA draft. Simmons is the franchise's first top pick in the draft since Iverson was taken No. 1 in the 1996 draft.

Even though it was widely known that Philadelphia would take Simmons, who worked out for the team privately Tuesday in his first and only workout leading up to the draft, the Australian was relieved after he became a Sixer.

"I'm happy to be part of the family now," Simmons said. "It's a weight off my chest. I've been looking forward to this day for a while, so I'm glad I've made history, not only for myself but my family and Australian basketball."

Simmons joins Shaquille O'Neal (1992) as the second top pick out of LSU. He becomes the second Australian to be taken first overall after Andrew Bogut in 2005.

At Melbourne's Box Hill Senior Secondary College, where Simmons attended ninth and 10th grade when he was 15 and 16 years old, students watching on a TV set erupted in cheers at his selection.

"The kids were all excited and happy for him," said Kevin Goorjian, Simmons' former basketball coach at Box Hill. "He has worked really hard to get here. And he's here now. It's a fantastic achievement for him and his family. We're all so proud of him."

The 19-year-old Simmons impressed with his versatility in his one year in Baton Rouge, averaging 19.2 points, 11.8 rebounds and 4.8 assists per game. He also showed off terrific ball handling, court vision and passing abilities for a 6-foot-10, 240-pound player.

"I coached Ben's father a long time ago," said Brown, who coached the Australian men's national team and was also head coach of the Sydney Kings of the Australian National Basketball League. "I've known Ben since he was born. I've known his family since the late '80s. Just having that knowledge of where he was raised and understanding the culture, I also lived 17 years in Australia."

Simmons' task is a tall one. The forward -- along with previous lottery picks Jahlil Okafor, Joel Embiid and Nerlens Noel -- will try to turn around a franchise that has lost 199 games combined over the past three seasons.

"They know I can play the point-forward position," Simmons said of handling the ball for the Sixers. "I'm comfortable bringing the ball up, so I think that's one of those things we'll talk about and discuss a lot."

While the Sixers have been wandering in the NBA wilderness for the past few seasons, theNew Orleans Pelicanswere expected to reach the playoffs last season, but instead found themselves picking in the lottery.

With the sixth overall pick, the Pelicans elected to beef up their scoring punch by taking Oklahoma'sBuddy Hield. The Sooners senior became the highest drafted four-year man since 2006, when Shelden Williams (Duke) and Brandon Roy (Washington) were selected fifth and sixth overall.

GuardJamal Murraywas the first Kentucky player off the board, going at No. 7 to Denver.

TheSacramento Kingsmade Washington power forwardMarquese Chrissthe eighth overall pick, though he was part of a trade with the Sunsthat ultimately netted the Kings the No. 13 pick (Georgios Papagiannis, Greece) and the 28th pick (Skal Labissiere, Kentucky).

Jakob Poeltlbecame the third Pac-12 player to go in the draft when he was picked at No. 9 by theToronto Raptors.

After a long and winding path that included stops instops in Uganda, Australia, Louisiana, Virginia and Canada, Sudan-born prep playerThon Makeris headed to Milwaukee after being taken by the Bucks with the 10th overall pick.

Gonzaga forwardDomantas Sabonis, the son of former NBA player Arvydas Sabonis, was selected 11th overall by theOrlando Magic. However, he was part of a blockbuster trade that sent him, Victor OladipoandErsan Ilyasovato the Oklahoma City Thunder for Serge Ibaka.

Baylor'sTaurean Princewas chosen at No. 12 by theUtah Jazz, but he will be sent to Atlanta as part of a three-team deal that also involves Indiana.

The Chicago Bulls used the 14th overall pick on national player of the yearDenzel Valentineout of Michigan State -- despite questions about the health of his knees.

The draft took a quick tour of Europe for the 15th and 16th picks with Spanish forwardJuan Hernangomezgoing to the Nuggets and France's Guerschon Yabuselesurprisingly going to the Celtics.

"Nobody was expecting," Yabusele said of being taken at No. 16. "I see [the cameras] coming close to me, see my name. So I was really surprised to be in here, but I was so happy."

The run on college players continued with St. Joseph's forward DeAndre Bembry going to Atlanta and Syracuse's Malachi Richardson getting picked by Charlotte. Richardson, however, will ultimately end up with the Kings as part of a proposed deal that would landMarco Belinelliwith the Hornets.

Ante Zizicbecame the second Croatian player selected in the first round; the Celtics used their third and final pick of the round to take him at No. 23.

At No. 27, the Raptors picked New Mexico State power forwardPascal Siakam, the WAC player of the year.

The Spurs and Warriors closed out the first round of the draft by taking Washington's Dejounte Murrayat No. 29 and Vanderbilt's Damian Jonesat No. 30, respectively.

Despite winning the national championship, not a single Villanova player was chosen in the first round. The Wildcats are the fourth team in the past 20 years to win a title without a player drafted in that year's first round, joining the ranks of Duke (2010), Florida (2006) and Arizona (1997).