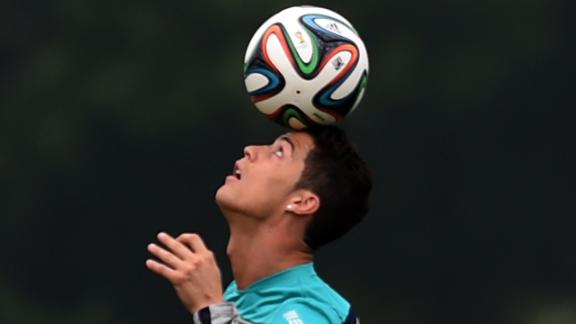 Portugal forward Cristiano Ronaldo will be fit to captain his country for its World Cup opener against Germany on Monday, a source told ESPN.

Ronaldo has been struggling with injuries in recent weeks. Although he was able to play all 120 minutes of Real Madrid's 4-1 victory over Atletico Madrid in the Champions League final last month, there have been concerns as to whether he would be ready for Portugal as they prepare to face Germany, the United States and Ghana.

The Portuguese FA recently revealed that Ronaldo was suffering with patellar tendinosis and a thigh injury, but he has returned to group training -- even throwing one of the New York Jets' footballs around -- and ESPN has been informed that he will start the Group G opener on June 16.

- For The Win (@ForTheWin) June 9, 2014Portugal have also had concerns over Real Madrid defender Pepe and Fenerbahce midfielder Raul Meireles, and coach Paulo Bento said preparations had been complicated by the trio's fitness troubles.

"It is complicated missing some players, but the biggest problem is for the player, who won't be able to do what he likes to do the most."

Despite Bento's remarks, ESPN has been informed that Ronaldo, who appeared to be in good spirits during Monday's training session, has already been declared fit to face Germany.