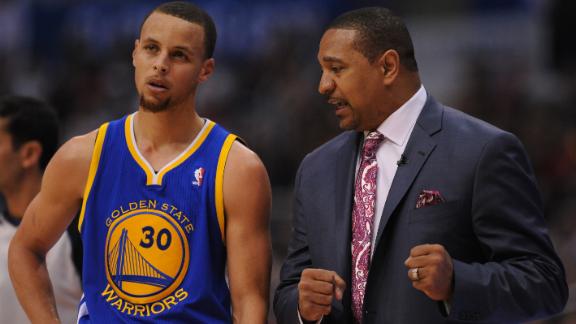 ESPN
By Ethan Sherwood Strauss
OAKLAND, Calif. --Golden State Warriors star Stephen Curry has become a popular name when it comes to the MVP debate, but to Curry's surprise his former coach isn't part of that chorus.

ESPN analyst and former Warriors coach Mark Jackson said Wednesday on the "Dan Patrick Show" that while Curry,Russell Westbrook of the Oklahoma City Thunder and LeBron James of the Cleveland Cavaliers,are all worthy candidates, he'd give his MVP vote to James Harden of the Houston Rockets.


"If you twisted my arm today, I would probably vote for James Harden," Jackson said. "The reason why is because he single-handedly has put that Houston Rockets team in the position that they're in today."


The comments come as a stark contrast to the way Jackson had previously championed his former charge as a superstar in the league, while he was coach of the Warriors.

When asked Friday about his former coach's comments, Curry said he was a bit surprised.


"It's his opinion obviously," Curry said. "He's probably been watching the league. People are going to ask what he thinks, especially his ties to the Warriors organization and myself specifically. Surprised me he said that. But, it is what it is."


Curry had been vocally supportive of Jackson prior to the coach's dismissal last offseason, something the Warriors point guard made mention of Friday.


"Obviously I wasn't shy about trying to defend him last year when things were rumbling outside of our locker room," Curry said. "But for him to ... it's kind of a different situation, but it is surprising that he didn't."


When asked if his former coach's endorsement hurt his feelings Curry responded, "It was surprising. It didn't really hurt my feelings because it's not like he was actually casting a vote officially, but it was just very surprising."


On Thursday, center Andrew Bogut, who had a less friendly relationship with Jackson, made light of his former coach's opinion.


Currently, Curry is projected to win the MVP award according to ESPN's NBA Forecast and is averaging 23.8 points, 7.8 assists and 4.3 rebounds per game for a Warriors team that at 62-13 is closing in on the No. 1 overall seed in the playoffs.