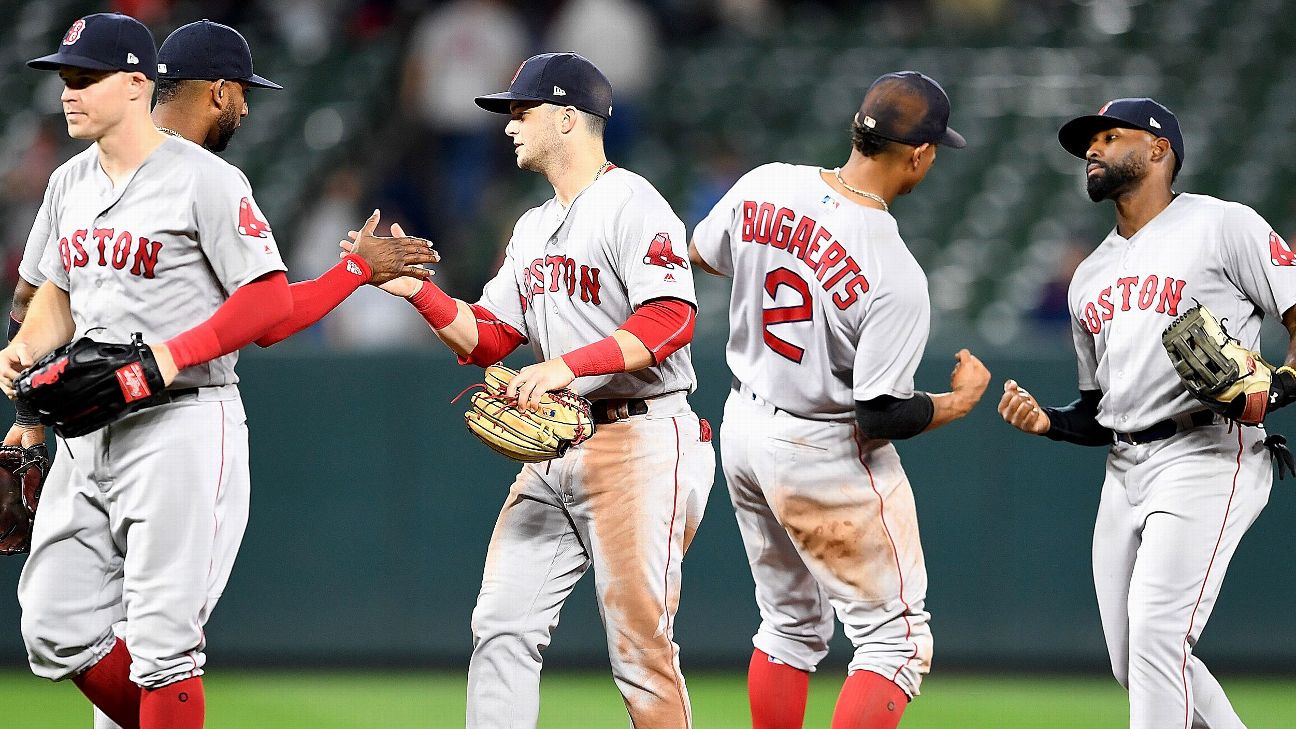 They were just a half-game behind the New York Yankees as they began a 10-game road trip to Baltimore, Seattle and Minnesota on Monday, but the 2-0 win over the Baltimore Orioles in 12 innings felt bigger than a win over the Orioles should feel. With the bats scratching out just six hits, Steven Wright and five relievers were superb in spinning just the eighth extra-inning shutout in Camden Yards history.

Wright's potential emergence could be a big factor in the AL East battle royale with the Yankees. With Drew Pomeranz on the disabled list, Wright has started twice and allowed no runs in 13 innings against the Detroit Tigers and Orioles. This isn't necessarily a fluke for the knuckleballer; remember, he was an All-Star in 2016 before injuring his shoulder in August while pinch running. He had knee surgery in 2017 and missed most of the season, then was suspended 15 games this year after violating MLB's domestic-violence policy.

His performance comes at a time when the Yankees suddenly are scrambling in their rotation. Jordan Montgomery is out with Tommy John surgery, Masahiro Tanaka just landed on the DL after tweaking both hamstrings running the bases over the weekend, Domingo German has a 5.32 ERA filling in for Montgomery, Luis Cessa is on the DL with an oblique strain and prospect Chance Adams has struggled at Triple-A.

At the same time, the Red Sox's bullpen has kept pace with the Yankees' pen, with a small edge in ERA (2.98 to 3.02) and a bigger edge in save-to-blown saves ratio (24/5 to 18/8). As Monday's game indicated, the Red Sox have solid depth in front of closer Craig Kimbrel. The Yankees may be the team looking for additional bullpen help, especially with a rotation that isn't eating up as many innings as one would like. Indeed, the back page for the New York Post on Tuesday features San Diego Padres reliever Brad Hand and the subhead, "Why Padres' star reliever may be best cure for Yanks' pitching problems."

Also, Mookie Betts made a surprising return to the Boston lineup, eschewing any rehab games in his first action since May 27. He went 1-for-5.

Braun trolls Cubs ... but Cubs get last laugh: This was fun for the Brewers:

The Cubs scored five runs in the 11th and improved to 8-1 against the Brewers (who are 38-19 against everyone else). The Cubs also became the first team to beat the Brewers this year in a game Josh Hader pitched.Chicagotied the game with a run off Hader in the eighth.

Not to be confused with Jack Bauer: Jake Bauers has been one of my favorite sleeper prospects in the minors. He has put up solid, if unspectacular numbers as he has progressed, but he has always been young for his league. He's still just 22 and in his fifth major league game cracked his first home run while adding a double and two walks in an 8-4 win over the Blue Jays:

The Cardinals' unsung hero: Paul Goldschmidt has been on a tear for the Diamondbacks, but so has Jose Martinez for the Cardinals. He went 3-for-4 in a 5-2 win over the Padres, including his 10th home run-- and fifth in five games. He has raised his average from .294 to .327 with a nine-game hitting streak in June in which he's hit .531. Overall, he's at .327/.397/.531, and while he's a liability at first base-- he's at an ugly minus-8 Defensive Runs Saved-- he's been the team's best hitter.

Braves fans showing up at ballot box: The first results are in for the NL All-Star voting and Freddie Freeman, Ozzie Albies and Nick Markakis lead at their positions. It's hard to argue against any of the three, although Markakis has slowed down with one home run in his past 30 games and Albies is hitting .206 over his past 23 games with just two home runs. The voting leaders:

Miracle Mariners: The Mariners began their tough stretch of 13 games against the Angels, Red Sox and Yankees with a 5-3 win over the Angels as Nelson Cruz swatted two home runs.

-- The leadoff hitter has drawn four walks all season.

-- The All-Star second baseman has been suspended since May 13.

-- The top two setup guys at the start of the season are both on the DL.

This team is a half-game ahead of the Astros.

The agony of defeat: Auburn and No. 1 Florida, playing for a trip to the College World Series, were tied in the bottom of the 11th when this happened:

Ryan McGee has a rundown of the eight teams here.

The Cinderella team is Washington, making its first trip to the CWS. In a thrilling Super Regional win over Cal State Fullerton, the Huskies blew a 3-1 lead in the top of the ninth, tied it in the bottom of the ninth, saw Fullerton hit a rare home run in the top of the 10th (Fullerton had hit just 13 home runs all season), then scored twice in the bottom of the 10th to walk it off.