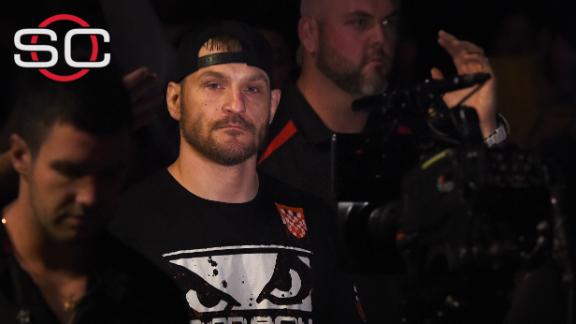 Heavyweight Stipe Miocic has agreed to step up on two week's notice to challenge Fabricio Werdum for the UFC heavyweight championship on Feb. 6 in Las Vegas.

UFC president Dana White announced the fight Sunday. Miocic (14-2) replaces Werdum's original opponent, former champion Cain Velasquez (13-2), who was forced off the card due to a back injury. There is no timetable for Velasquez's return.

The title fight will headline a UFC 196 pay-per-view event at MGM Grand Garden Arena. Werdum (20-5-1) will seek his first defense of a title he claimed in June in a submission victory over Velasquez at UFC 188 in Mexico City.

Miocic, 33, was promised a title shot after a first-round knockout ofAndrei Arlovski earlier this month. Now, due to Velasquez's injury, that opportunity will come sooner than expected.

Based out of Cleveland, Miocic is 8-2 in the UFC, with five knockouts.

Injuries have repeatedly derailed Velasquez, who won the UFC championship in 2010 and again in 2012. He successfully recorded two title defenses in 2013, before a knee injury forced him to miss all of 2014.

He returned from a 600-day layoff against Werdum at UFC 188 on June 13, only to surrender the title. A former collegiate wrestler at Arizona State University, the San Jose-based heavyweight addressed his fans Sunday on social media.

"Training camp has been difficult for the last few weeks, but sometimes, no matter how much the heart and mind want to fight through an injury, healing has its own timeline," Velasquez wrote. "We thought we'd get through it, but we had to face the truth that it wasn't going to be OK in time to fight.

"My fans deserve to see me compete as close to 100 [percent] as possible. I'm committed to giving them that. I'm not going to let my fans down, and I want to make sure I do the right things to ensure a long career."