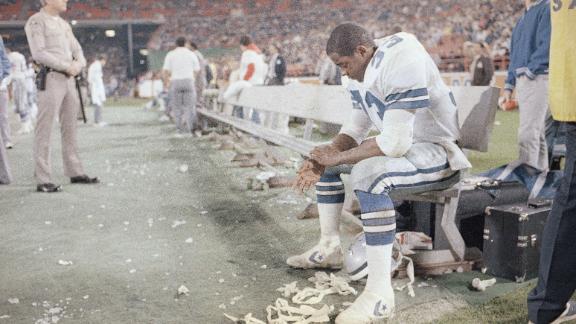 Hall of Fame running back Tony Dorsett, who was diagnosed with having signs of chronic traumatic encephalopathy in 2013, said he is "in a battle" and that he had no idea "that the end was going to be like this."

CTE is a degenerative condition many scientists say is caused by head trauma and is linked to depression and dementia. It is indicated by a buildup of tau, an abnormal protein that strangles brain cells in areas that control memory, emotions and other functions.

Dorsett was diagnosed along with Joe DeLamielleure and Leonard Marshall in November 2013 after undergoing brain scans and clinical evaluations at UCLA.

"I signed up for this when, I guess, I started playing football so many years ago," Dorsett told 1310 The Ticket in Dallas. "But, obviously, not knowing that the end was going to be like this. But I love the game. The game was good to me. It's just unfortunate that I'm going through what I'm going through.

"I'm in the fight, man. I'm not just laying around letting this overtake me. I'm fighting. I'm in the battle. I'm hoping we can reverse this thing somehow."

The 60-year-old Dorsett, the 1976 Heisman Trophy winner who played with the Dallas Cowboys and is the NFL's eighth all-time leading rusher, has struggled with his memory and has said in the past that he had trouble controlling his emotions and was prone to outbursts at his wife and daughters.

"It's very frustrating at times for me. I've got a good team of people around me, my wife and kids, who work with me," he said. "When you've been in this town for so long and I have to go to some place I've been going to for many, many, many years, and then all of a sudden I forget how to get there. Those things are frustrating when it comes to those things.

"I understand that I'm combating it, trying to get better. But, you know, some days are good. Some days are bad."