Trubisky explodes for 3 TDs after 0 in 1st 2 weeks 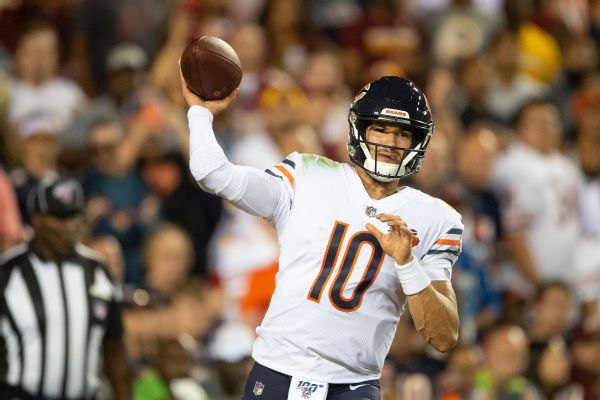 After coming under intense scrutiny for not throwing a touchdown pass in either of Chicago's first two games, Trubisky passed for three touchdowns, all of them to wide receiver Taylor Gabriel, before halftime in Monday night's 31-15 winover Washington.

Trubisky finished the first half 20-of-23 for 173 yards and three touchdowns (137.6 quarterback rating), the most completions in a first half in his career. He finished the game 25-of-31 for 231 yards, with his lone blemish an interception byJosh Norman at the Washington 6-yard line late in the third quarter.

Gabriel became the first Bears receiver with three receiving touchdowns in a game since Brandon Marshall in 2014. He later left the game because of a concussion.

"I want to give credit to Mitch," head coach Matt Nagy said after the game. "He had a really good week of practice. He was very mentally prepared. He's mentally strong. He understands that throughout this process, there's a lot of weight on his shoulders to do well. ... I like where he's at. We're slowly getting better."

Trubisky's first two touchdowns to Gabriel both occurred inside the 5-yard line, but the 25-year-old quarterback's third touchdown toss was arguably his best play of the season to date.

On third-and-17 from the Redskins' 36-yard line, Washington's pass rush forced Trubisky to move up in the pocket and slide to the left. On the move, Trubisky fired a pass downfield to Gabriel near the front right corner of the end zone. Gabriel was initially ruled out of bounds, but the replay clearly showed that the veteran receiver got both feet in bounds, and the call was reversed.

"I think we're still growing and evolving as an offense," Trubisky said. "I don't know if I'd call it a breakthrough yet. We got to keep getting better, keep growing. Definitely room for improvement and definitely in the second half, especially on my part. If we just stick to the process and keep growing and keep learning and sticking together, we're going to be all right."

The Bears desperately needed Trubisky -- drafted second overall in 2017 -- to have a good showing at FedEx Field after he sputtered through the first two weeks of the regular season.

Through two games in 2019, Trubisky's completion percentage (58.3), passing yards (348), touchdowns (zero), Total QBR (27.5), yards per attempt (4.8) and number of attempts that traveled 10-plus yards in the air (16) were substantially worse than his play in the opening two games of the 2018 season, according to ESPN Stats & Information.

The Bears faced third-and-7 or worse on 16 of 26 conversion attempts (62%) against Green Bayand Denver. Last season, the Bears needed 7 or more yards on just 43% of their third-down plays.

On Monday, Trubisky proved prolific on third down, going 10-for-11 for 133 yards and a touchdown. 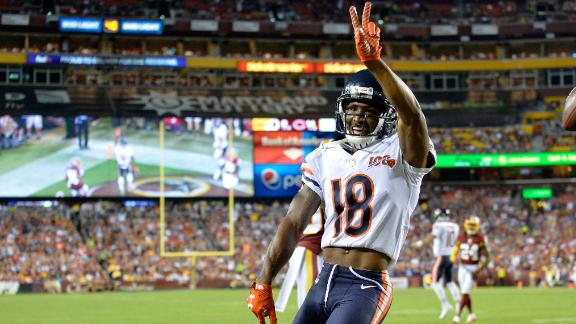