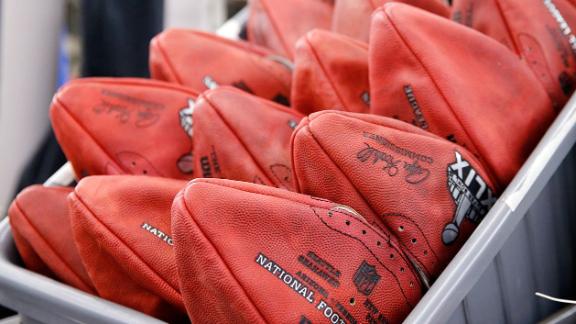 Vincent conducted an interview with "60 Minutes Sports" that airs Tuesday on Showtime, as reported Monday by MMQB.SI.com, in which he said Grigson notified the league about a potential deflation problem.

There have been various reports as to how NFL officials became aware of the situation and whether Indianapolis tipped them off. Nobody in the Colts organization has confirmed those details, and Grigson was silent on the topic in the days leading up to Sunday's Super Bowl.

"Everything I'm sure is going to come out in the investigation, guys. Like I said, it's not appropriate for me to talk about. I can't do that," Grigson said Jan. 23 when asked whether he or anyone else in the Colts organization had notified the league about the Patriots using underinflated balls. "It's in the league's hands. I'm sorry."

Vincent also said in the interview that he did not read former FBI director Robert S. Mueller III's report that the NFL failed to properly investigate the Ray Rice case.

"The crime had already been committed," he said. "There was a ton of public speculation at the time what we did, what we didn't do. We acknowledge we made a mistake."

He also expressed regret for the league's handling of the Rice assault case and wants to move ahead.

"We didn't apply the proper discipline," he said. "I'm not sure how much we can continue to keep talking about that particular."

The NFL said before the Super Bowl that it is still investigating how the Patriots used underinflated balls in their AFC title game but has no conclusions yet and no timetable for resolving the cheating accusations.

The league said Jan. 23 that evidence shows the Patriots used underinflated footballs in a 45-7 victory over Indianapolis that gave them the AFC championship and a trip to Arizona to face Seattle in a game they won 28-24.

The league said its conclusions will be quickly shared when reached. NFL executive vice president Jeff Pash and Ted Wells of the law firm of Paul Weiss are leading the probe.