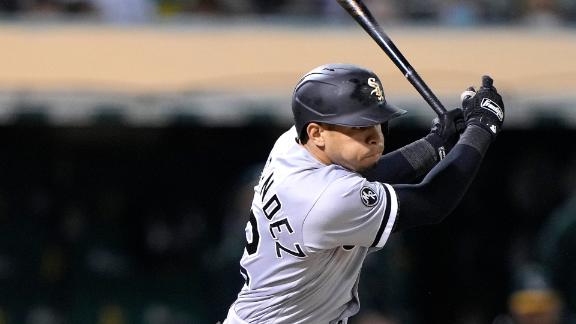 OAKLAND, Calif. -- - Tony La Russa has seen his share of celebrations during all his decades in baseball. What the Chicago White Sox gave Jimmy Lambert for his first major league win ranked right up there.

"I'll just say the beer was very cold," said the 26-year-old right-hander, who had Tommy John surgery in 2019 and "didn't know if I'd ever get a chance to win a major league game."


Gavin Sheets hit a go-ahead RBI single in the fifth to back Lambert, Cesar Hernandez added a two-run single in the same inning, and the AL Central-leading White Sox beat the stumbling Oakland Athletics 6-3 on Tuesday night.

Lambert (1-1) allowed three hits over five solid innings to win in his third career start and six appearance as Chicago matched its season-high of 22 games above .500 (80-58).

"He's got one of the most exaggerated beer showers I've seen in a long time," La Russa said. "The win was worth it I'm sure, but he's paying a big price right now."

Both managers and the training staffs came out when Chicago's Leury García stole a base in the eighth and made a dive under leaping second baseman Tony Kemp, who landed hard on the ground and was nursing a sore left wrist later.

Brian Goodwin added a two-run single in the eighth for Chicago, which lost two of three at Kansas City over the weekend, including getting shut out 6-0 in Sunday's series finale.

This marked La Russa's return to the place he managed the A's from 1986-95, winning a championship in the 1989 earthquake World Series and losing the World Series in 1988 and '90.

Elvis Andrus and Starling Marte hit RBI singles in the eighth for the A's. They have reached three straight playoffs, but are suddenly searching for answers in September to stay in the chase, losing their fourth straight game following a weekend sweep in Toronto.

"We know what we can do, we know we have the talent here," Matt Olson said. "We truly believe that we're a team that should be in the playoffs and should make a long run in the playoffs. ... Here on out we've got to play better if we want to win the World Series."

Yasmani Grandal drew a bases-loaded walk in the first to put Chicago ahead before the A's tied it on Olson's sacrifice fly in the bottom half.


James Kaprielian was done after four innings and 92 pitches. It marked the 15th time in the last 23 games Oakland's starters have pitched fewer than five innings.

Slugger Khris Davis drew cheers before a flyout as a pinch-hitter in the sixth, his first game back in an A's uniform at home since being called up last week.

White Sox reliever Liam Hendriks - who closed out his former team for save No. 33 - would hate to see the A's leave Oakland, where he pitched for 4 1/2 seasons before departing in free agency last winter. He still loves it here.

Hendriks, for one, insists his former teammates are clearly affected by the uncertainty and constant chatter about a possible relocation to Las Vegas - a move the club is exploring.

"It's really affecting not only what's going on with the moving of the city or the stadium or whatever like that, but I guarantee it has an affect on the way guys are playing on the field because of the added extra noise that's going on, the unnecessary stuff that's happening, and I think it's sad," he said. "It's sad for not only this group, but it's sad for the organization as a whole because this is a storied organization that deserves better."

White Sox: Eloy Jiménez left the game with a bruised right knee after sliding into home in the fifth. He is day to day. ... RHP Lance Lynn (right knee inflammation) is slated to throw a bullpen session Wednesday. ... Lucas Giolito (left hamstring) threw on flat ground Tuesday. "They're both feeling better. We're optimistic of them starting a game for us sooner than later," La Russa said of the pitchers. ... SS Tim Anderson, placed on the injured list last Wednesday retroactive to Aug. 29 because of left hamstring tightness, worked out in Oakland during Monday's off day but there's no timetable for his return, with La Russa noting, "he's still not 100%." ... OF Adam Engel, out since Aug. 13 with left shoulder inflammation, was set to begin a rehab assignment with Triple-A Charlotte.

Athletics: 2B Josh Harrison exited with low back tightness. ... RHP Chris Bassitt, hit in the face by a 100-mph line drive during the series in Chicago on Aug. 17 before needing surgery for three cheekbone fractures, was out on the field shagging balls and throwing them back. He has been working out in the weight room and could soon begin a more structured throwing program. ... OF Seth Brown, on the COVID-19 injured list, is back around the team and was scheduled for workouts Tuesday and Wednesday to determine whether he might need a rehab assignment. "He's feeling a lot better," manager Bob Melvin said.

A's RHP Frankie Montas came off the restricted list after he was unable to travel to Toronto because the club couldn't secure him an expedited visa. Oakland optioned LHP Sam Moll to Triple-A Las Vegas after Sunday's game.