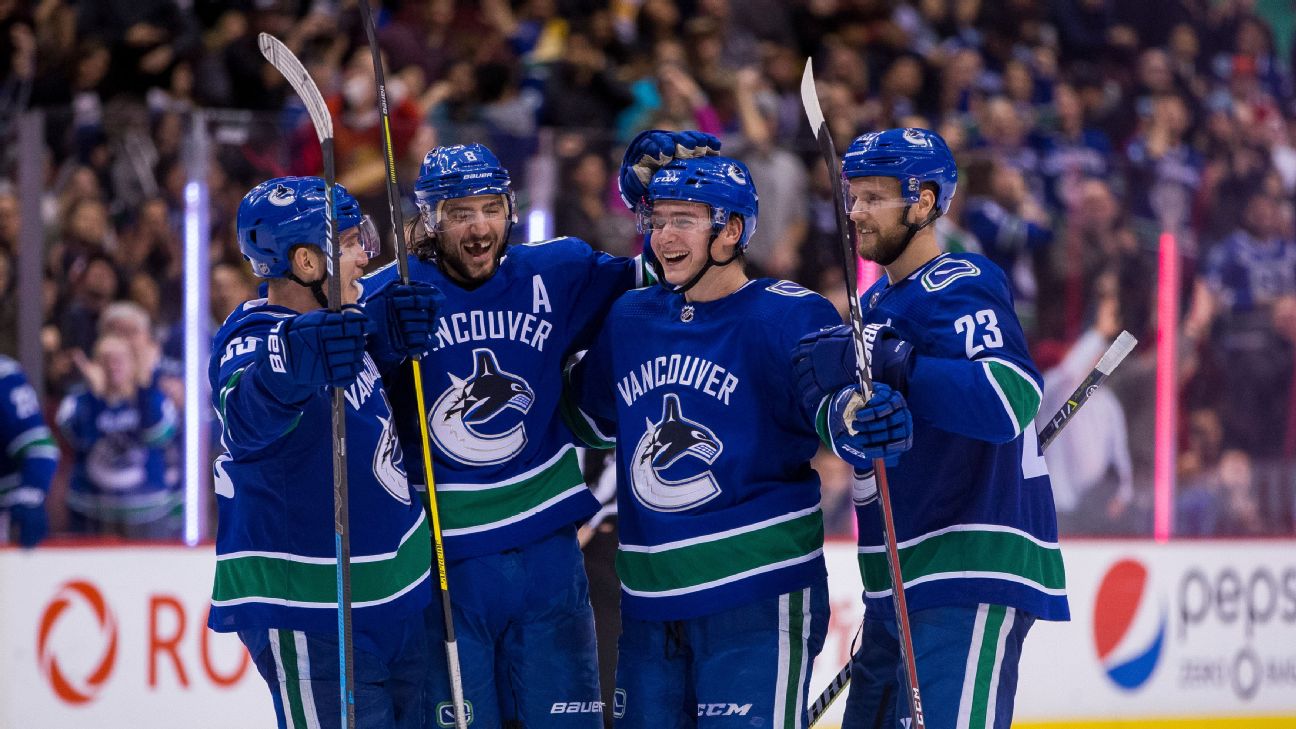 It's a jumbled mess of teams fighting for the two Western Conference wild-card slots. We debate which teams will ultimately emerge, along with who we are secretly rooting for and against:

. The Canucks are one of the best stories of the season. Coach Travis Green has made them really, really difficult to play against, which means they'll be a tough out for a No. 1 seed. But more to the point, I want Elias Pettersson in the playoffs to see what this incredibly dynamic rookie does on the greatest stage of the season. OK, and have everyone re-litigate the resignation of team president Trevor Linden, as it turns out the Canucks were ready to contend this season.

Meanwhile, I want the Blackhawks in the playoffs. Not because I think they're going to be all that competitive -- I'm guessing whoever draws them is effectively getting a first-round bye -- but because they'll draw a few additional eyes to the postseason and would be the greatest symbol of how nothing this season makes sense: GM Stan Bowman fires Joel Quenneville to signal a rebuild, and then the team makes the playoffs. Oh, and it would keep them away from Jack Hughes. No shortcuts, Stan.

. Elias Pettersson has been my single favorite player to watch this season. I want to see the 20-year-old perform on a bigger stage -- and with stakes. Playoff hockey, especially in the West, is noted for increased physicality. Pettersson shining in May -- and heaven forbid (sorry for the jinx, Canucks fans) June -- would be the ultimate knock on scouts who downgraded the Swede because of his slight frame, and a symbolic moment encapsulating the current NHL era, built on speed and youth. The Canucks have an exciting 23-and-under core; getting a taste of playoff hockey could do wonders in setting the culture.

As for the Blues? There's nothing sweeter than a worst-to-first storyline, even in a condensed six-month timeline. If St. Louis makes the show, it will be because they went on a tear down the stretch. Nobody would want to face the Blues.

. The playoffs serve as the league's biggest showcase. There are additional eyeballs fixated on the games and extra historical weight being placed on the results. With all other things being equal, I typically root for the top stars in the game to get a chance to show everyone what they're capable of on the national stage (and when the games matter most). By that logic, I'd like to see the Avalanche and Oilers be the ones to make it out of the options available, if only to see how far Nathan MacKinnon and Connor McDavid can take their respective teams.

From an X's and O's perspective, a playoff series boils down to who can get the individual matchups they want most often. It would make for great theater seeing how their opponents game planned around attempting to slow them down and whether their own greatness could ultimately overcome it.

. There's nothing about this team that screams "I need to rearrange my life to watch them eliminated in the first round again," with due respect to the season Zach Parise is having and to goalie Devan Dubnyk's capabilities. Finish outside the money, bid adieu to Bruce Boudreau -- whom I love, but with a new general manager this is inevitable -- and begin the reconfiguration of this roster under Paul Fenton. Which hopefully features better trades than that Nino Niederreiter one, because -- yikes.

. Another Stanley Cup playoffs without Connor McDavid is a disservice to hockey. Period. But issues in the Oilers organization have seeped through all levels, and a complete overhaul is needed to salvage McDavid's prime. Yes, they have the opportunity to hire a new GM, but it goes deeper than that. If the Oilers miss the playoffs yet again, perhaps ownership will mull more seismic (and in my mind necessary) structural changes. If they get in, they're just buying more time, and this current group wouldn't seem to have great Stanley Cup chances anyway.

. Ideally, we'll be spared having to watch another playoff series where a younger, faster team skates laps around them as they hopelessly lean on John Gibson to bail them out. Last year's first-round evisceration at the hands of the Sharks that might have been funny if it hadn't been so downright sad. We've really seen all we need to see there, at least until the organization undergoes a dramatic makeover.

. The Blues have something in goalie Jordan Binnington, and their underlying numbers have been trending up for some time. Plus, there's already been so much investment in this group last summer through trades and free agency, I don't expect another raise-the-white-flag sell-off from GM Doug Armstrong around the trade deadline. I thought this was a playoff team before the season, and now that they've found some competent goaltending, I expect they'll still be one.

Speaking of competent goaltending, the Avalanche haven't had any since around Christmas. I refuse to believe that neither Semyon Varlamov nor Philipp Grubauer will rebound, just like I refuse to believe that the Nathan MacKinnon line won't find a way to carry this team to the wild card again. Although the idea that the Avalanche could have both their pick and Ottawa's in the draft lottery sure is tantalizing.

. The Canucks have sustained it for this long, so I'm buying in (plus it seems they're hanging on to defenseman Alexander Edler, perhaps their own version of a deadline rental). Minnesota is a seasoned veteran group. They haven't gotten enough credit this season due to inconsistency, but when they're on, they're scary.

I want to pick the Avalanche, but unless GM Joe Sakic gets some secondary scoring help at the trade deadline, I don't think this team has enough oomph to win down the stretch. Over the past two months, Colorado has just six wins, fewest in the league.

. I think it'll come down to the three teams in the Central Division. The Avalanche are clearly a flawed team, but their top line is such a difficult problem for opponents to deal with that they'll almost single-handedly keep them afloat in the race. The Wild are once again whatever the antithesis of sexy is, but they've got two things going for them: They've got a head start on the competition with their 56 points already banked, and their 54.6 percent expected goal share at 5-on-5 is good for fourth best in the NHL, which is a sign that they're at least a legitimate threat.

The Blues are the team to watch most closely. They were a trendy preseason sleeper pick in the preseason, and they've been playing more like that team we all expected to see after a shockingly shaky start. In the 25 games since the calendar flipped to December, they're second behind only the Sharks in shot attempts, and their 55.9 percent share in shots on goal is tops in the entire league. They're still digging out of the early-season hole created by the disastrous performances by Jake Allen and Chad Johnson in net, but Binnington has been tremendous since being called up. You don't want to make too much of a 10-game sample, but he certainly wouldn't be the first or last goalie to come out of nowhere, get hot, and carry his team on a long run.
Report a correction or typo
Related topics:
sportsespnchicago blackhawksedmonton oilersst louis bluesvancouver canucksnhlcolorado avalanchedallas starsarizona coyotesanaheim ducksminnesota wild
Copyright © 2020 ESPN Internet Ventures. All rights reserved.
More Videos
From CNN Newsource affiliates
TOP STORIES