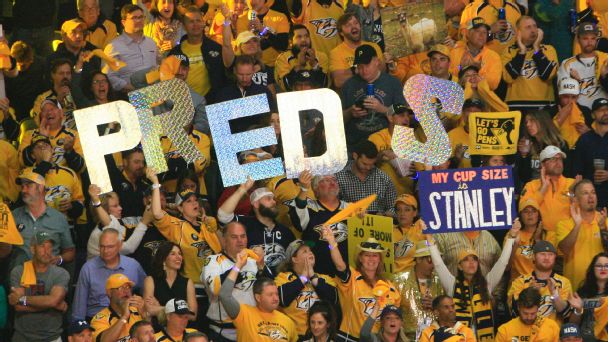 In today's NHL, creating a consistently competitive team is the best path toward making a dynasty.

Although the common myth is that it's hard to build a team capable of multiple championships in the salary-cap era, results prove otherwise.

Since the 2004-05 lockout, just three teams -- the Chicago Blackhawks, Pittsburgh Penguins and Los Angeles Kings -- have won eight of the 12 Stanley Cups awarded.

The Blackhawks and Penguins, specifically, have been able to put themselves in this position through signing the right core players long term to give their teams some level of consistency.

The Penguins, for example, have been able to keep Sidney Crosby, Evgeni Malkin and Kris Letang on common-sense deals while supplementing with fresh talent the past couple of years to create their current winning dynamic. The Blackhawks made sure to fit Patrick Kane, Jonathan Toews, Marian Hossa, Duncan Keith, Brent Seabrook and Corey Crawford in their salary structure while juggling complementary parts.

Both organizations have each won three Cups in the cap era.

Those teams are certain to compete for Stanley Cups in the near future, but one other organization has built itself as the main challenger to their dynasties: the Nashville Predators, last year's Western Conference champions who swept Chicago out of the postseason and lost to Pittsburgh in the Cup Final.

"They have a great core of young guys who are locked up," an Eastern Conference scout said of the Predators. "They're obviously enjoying it there and love it there, and obviously winning helps that. There are no guarantees in sports. That's why you play the games, but it seems like they've set themselves up for a good run over a handful of years here that they can be potentially Stanley Cup contenders."

Over the past several seasons, Predators general manager David Poile has aggressively inked his star players to long-term, salary-cap-friendly deals, and so far almost all his moves have paid off. In many respects these decisions have been more impactful than Poile's headline-grabbing trade of defenseman Shea Weber for blueliner P.K. Subban last summer.

At forward, Poile signed first-line center Ryan Johansen to an eight-year, $64 million contract this offseason. He also inked first-line winger Viktor Arvidsson to a seven-year, $29.75 million deal. Along with first-line winger Filip Forsberg -- who signed a six-year, $36 million contract in the summer of 2016 -- the Predators' top trio has three 30-goal scorers being paid a combined $18.25 million. All those forwards are 25 or younger.

According to CapFriendly.com, the Predators still have more than $6 million left in salary-cap space.

"I see some guys who signed right before they really turned the corner, like Josi and Ekholm, where they signed these long-term deals to get security and they really hadn't turned into the players they are right now," a player agent said. "The reason they're able to do this is because of the deals they made with Ellis, Ekholm and Josi."

The Predators also still have their first-round picks for the next three seasons and employ other contributing younger players on low-salary contracts, such as forwards Colton Sissons and Kevin Fiala.

"I think [their salary structure] is a bit of a testament to the organization," the scout said.

Nashville still does have question marks, however. The Predators lost winger James Neal, who averaged 25.7 goals in three seasons with Nashville, in the expansion draft. Captain Mike Fisher retired and goaltender Pekka Rinne, who makes $7 million per year, will be 35 in November. Last season, the Predators finished 16th in the NHL. Historically speaking, they've also never won their division and didn't make it past the second round of the playoffs until 2017.

Some need more evidence from the Predators before proclaiming their arrival as consistent members of the NHL's elite.

"You need three foundations: a top-end superstar forward, a superstar defenseman and a superstar goalie to have that dynamic. And I think Johansen can be that [forward]. Is he there right now? I don't think so, but he can be," a Western Conference scout said. "Subban they say is an elite defenseman, but I don't think he is, and Rinne is an elite goaltender, but he's on the downslope of his career.

"But they have four or five defensemen back there who are really good players too, so we'll see."

Along with Nashville, here are some other teams that have the ability to challenge -- and potentially win -- several Cups in the next few years.

The 30-year-old Crosby and 31-year-old Malkin have led the Penguins to the past two Cups and should be primed for another run next season.

Forwards Connor McDavid and Leon Draisaitl are arguably the best young 1-2 punch in the game and are signed long term.

Although the Blackhawks have been ousted in the first round the past two seasons, they still boast plenty of championship-caliber players in their primes.