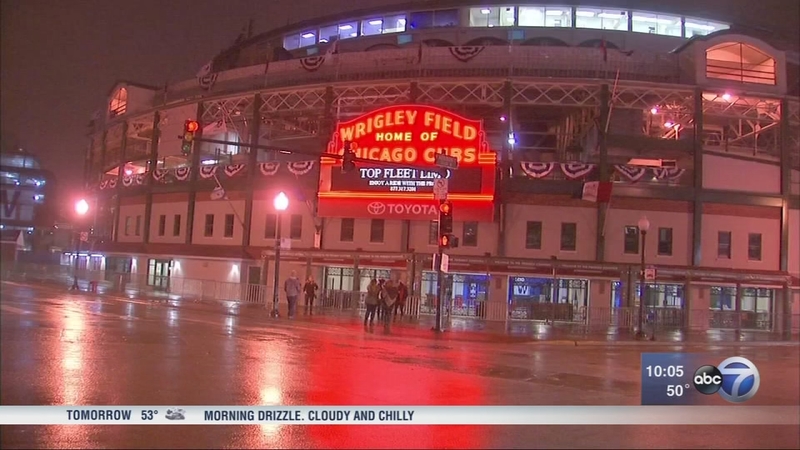 CHICAGO (WLS) -- Unprecedented crowds are expected in Wrigleyville throughout the Cubs' historic World Series against the Cleveland Indians, whether they're playing away or at home. Here are a few guidelines to keep fans safe and secure during the celebration.

UPDATE TO PREVIOUSLY ANNOUNCED RESTRICTIONS: Through Wednesday, Nov. 2, motorists and residents can also expect parking restrictions from 5 p.m. to 6 a.m. daily, on the following streets:
- Webster: Sheffield to Bissell
- Lincoln: Webster to Fullerton

SECURITY
UPDATE TO PREVIOUS ENFORCEMENT MEASURES:
SCALING POLES, BARRICADES OR EQUIPMENT IS PROHIBITED. Violators risk arrest.
TRUCK TRAFFIC: Truck traffic will be prohibited within a one block radius of Wrigley Field by 3 p.m. on game days.

RESIDENTIAL PERIMETER: A secondary perimeter will be put into effect during home games to restrict incoming traffic to local residential traffic only. Motorists will have to provide a photo ID with proof of address to enter.
DRONES: The City reminds fans and residents that using drones in public spaces in Chicago is illegal, and anyone caught using one will be arrested.
IF YOU SEE SOMETHING SAY SOMETHING: Whether attending the game or watching the World Series in local businesses in Wrigleyville or other areas of the city, fans should be mindful to respect the surrounding communities and, as always, be vigilant and report any suspicious activity. If fans notice suspicious criminal activity or suspicious objects, call 9-1-1 or notify on-site security immediately. Some of these activities could be innocent; however, it's up to law enforcement to determine whether the behavior warrants investigations so, If You See Something, Say Something.

STREET CLOSURES: The following street closures are expected to be in effect on Friday, Saturday and Sunday, when deemed necessary, and could last for hours after a game:
Clark: Irving Park to Roscoe
Addison: Halsted to Racine

Limo and Taxi Information
-Limousines and ride share services must drop-off, pickup and stage on Irving Park Road between Clark and Seminary.
-Taxi staging will be near Addison and Racine and also near Addison and Halsted.

Red Line: Additional train service will be provided leading up to first pitch through the end of the game. Addison Red Line (wheelchair accessible) is closest station.
Yellow Line: Train service between Howard and Skokie will be extended until 2 a.m.

STAY IN THE LOOP ON CTA SERVICE
Plan your trip using the Google Transit Trip Planner. Be sure to also check out CTA on Facebook or Twitter (@CTA) for system travel updates and alerts. For details about all CTA service, call 312-836-7000 or visit the CTA website at transitchicago.com.

PARKING
-Residential Permit Parking will be in effect and will be strictly enforced. Vehicles parked in violation of the permit parking regulations are subject to ticket and tow. Cubs Night Game Tow Zone is in effect from 5 p.m. - 10 p.m.