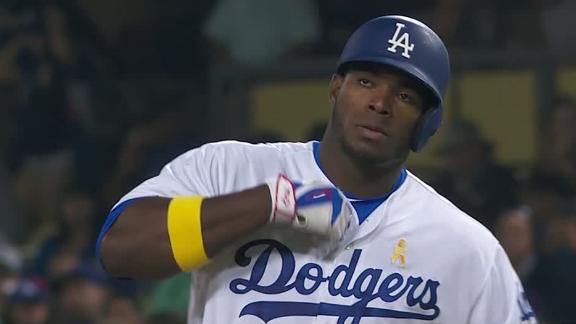 Yasiel Puigreturned to the Los Angeles Dodgerson Friday after a one-month stint at Triple-A Oklahoma City, going 2-for-4 in a4-2 loss to the visitingSan Diego Padres.

"I'm happy that I was given the opportunity again," Puig said Friday through an interpreter before the game. "It was helpful for me to go to Oklahoma City and being able to share with the coaches there and with other players. It just helps me moving forward."

Puig started in right field and batted fifth against the Padres. His two singles boosted his batting average to.263. He has seven home runs and 34 RBIs in 281 at-bats.

He grounded out with the bases loaded in the third. He singled and went to second on a throwing error in the seventh, but the Dodgers ended the inning with consecutive strikeouts.

"It was really good to see him back in the lineup," manager Dave Roberts said. "His energy and focus was good. He ran hard."

Puig said it was "a little strange" to be back with the Dodgers but that he had learned how to be more disciplined and a better teammate.

"Five minutes ago, I was talked to by my teammates, and they explained to me what they needed from me," Puig said. "That was really what I was looking for was a talk with my teammates, a talk with everyone and have an understanding of what was needed from me to succeed with this team. Now I'm going to get to work, and hopefully you will see the success of 2013. That's what I will be working for."

He also said he hadn't worried about whether he would return.

"I was just doing my job in Oklahoma," he said. "I was doing the things I wasn't doing here. They made the right choice sending me down there. But now I was doing the correct things to come back. I'm here now and grateful for the opportunity."

Earlier this week, Roberts said he was unsure whether Puig, who had been at Oklahoma City since Aug. 2, would be called up. MLB rosters expanded Thursday.

Roberts and Andrew Friedman, president of baseball operations, first discussed bringing Puig back with a handful of veteran players.

Puig was placed on revocable waivers last month, and at least one team claimed him. Fox Sports reported Friday that team was the Milwaukee Brewers and the "legitimate attempt" at a trade involved outfielder Ryan Braun.

"This is my job," Puig said. "I can only do what helps me to play better and to be a good teammate. The rest is not up to me. I don't decide those things. If I am here in Los Angeles, I am going to take advantage of the opportunity and enjoy the city. If it's with another team, that is something I can't control, but I am thankful for the opportunity, but I will do my best to try and be a good teammate."

His addition could help a Dodgers lineup that has struggled against left-handed pitching this season and was nearly no-hit by San Francisco Giants lefty Matt Moore last week.

Through Friday's games, the Dodgers were last in the National League against left-handers in batting average (.220), on-base percentage (.297) and slugging percentage (.340).

ESPN staff writer Doug Padilla and The Associated Press contributed to this report.