"I reached in the water and I felt a leg, and then I pulled her upside down out of the water," Officer Darrell Shaffer said
WLS
By Karen Jordan 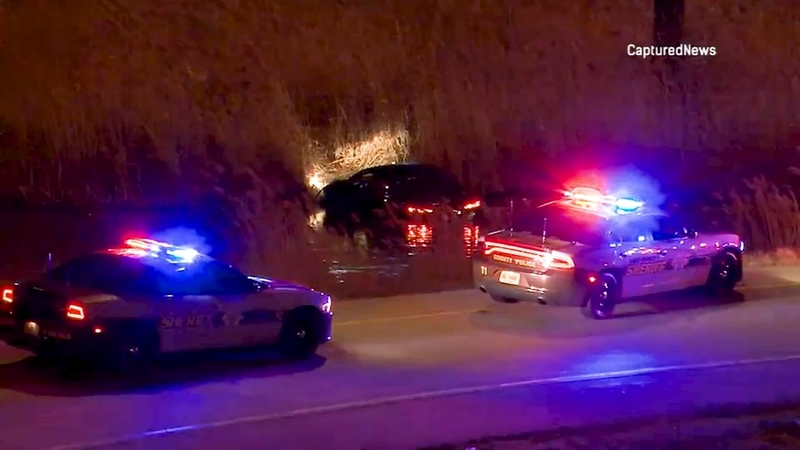 ST. JOHN, Ind. (WLS) -- A St. John, Indiana police officer is being credited with rescuing two children from a vehicle that ended up in a retention pond after a police chase late Sunday night.

It was just after 11 p.m. Sunday night when St. John Officer Darrell Shaffer spotted a car after Lake County Sheriff's police had reported it fled a traffic stop. Sheriff's police said they had pulled the vehicle over when a man jumped out and tried to run away and a woman who was a passenger in the car got behind the wheel and took off.

Shaffer followed the car as it headed east bound on I-80/94, and when it tried to exit at Kennedy Avenue, it went off the road and into a retention pond.

Shaffer said Monday it was one of the scariest situations he has faced in his 24 years of being a police officer.

"If you're not afraid, then you've lost your edge," he said.

Shaffer jumped out of his car and into the water up to his chest, not knowing there were children in the car.

"Officer Shaffer noticed a young child, a 3-year-old female, floating in the backseat at which time, he was able to pull her to safety out of the front window," St. John Police Chief Steven Flores said.

"When I got her out through the passenger side window, they kept yelling that there was another baby in the car, but I never saw another baby," Shaffer said.

Shaffer said he kept searching and found the 8-month-old baby girl, a moment that brought him to tears.

"I reached in the water and I felt a leg, and then I pulled her upside down out of the water," he said.

Shaffer said the children were submerged about 90 seconds and were conscious and alert when medics took them to the hospital.

The children's mother was behind the wheel and taken into custody. The father of three said reliving the incident makes him emotional.

"When you have kids of your own and you see them struggling, it's not their fault," Shaffer said.