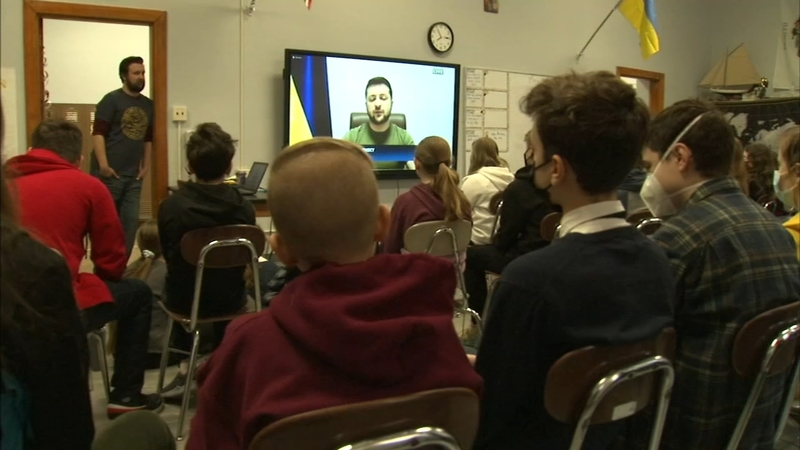 CHICAGO (WLS) -- The emotional plea by Ukrainian President Volodymyr Zelenskyy wasn't just an address to congress, but to the American people, asking for more, and both children and adults in Ukrainin Village are taking it to heart.

Eight refugees who just fled from Ukraine are now enrolled at the St. Nicholas Cathedral School in Chicago, and their new classmates are lifting them up during these dark times.

But there was a heartbreaking sense of emotion that filled a classroom Wednesday, as some students watched President Zelenskyy's speech and shared some of the stories their own families are going through in Ukraine.

"Whenever I call my family members in Ukraine, we always start out with, 'How many times have you hid from a bombing?' instead of how are you, or how are you doing," said one student.

A show of hands represented the number of students at St. Nicholas Cathedral School that are Ukrainian, and on Wednesday students were standing up one by one to share their feelings about the war.

Eight refugee students are also now enrolled at St. Nicholas after fleeing from Ukraine with their families, putting this war into perspective for their classmates.

"Their fathers are there, some of their brothers, their pets also, their house, all of their things -- it's very hard for them," eighth-grader Sophiya Kovalchuk said.

It's an overwhelming learning experience these students are going to continue living through for now, while getting updates from abroad.

"It's been a transition, but they have really stepped up and have welcomed those students and have taken them under their wing, and it's been a beautiful experience just to see that," middle school math teacher Monica Idec said.

"Let us not fool ourselves and think if we accommodate Putin that he's not going to proceed to the Baltics to Poland and to other countries," she said.

She said swift military aide along with sanctions is paramount, and words are not enough.

"Mostly we would like to see much more powerful weapons to bring down all those muscles and all those planes," she said.