'Star Wars: The Last Jedi' draws crowds of superfans on eve of release 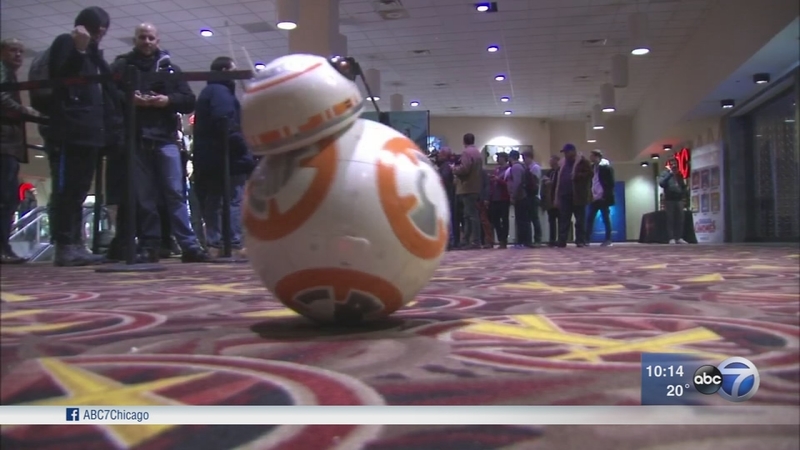 'Star Wars: The Last Jedi' draws crowds of superfans on eve of release

Lines started forming hours before the premiere. Star Wars die-hards rolled in and buckled up for yet another trip to the galaxy far, far away.

"People have butterflies in their stomachs and just a sense of euphoria. It's a contagious euphoria that's being spread around," said Luke Coyle, Star Wars fan.

At AMC River East some screenings of "The Last Jedi" sold out weeks ago. Some said they bought their tickets over the summer.

Andrew Panahon wasn't going to miss this; he put on his Jedi PJs and cleared his schedule.

"My boss was kind enough to let me off work today early so I could be here, and that was pretty sweet of him. Thanks, Chuck," Panahon said.

The eighth installment of the Star Wars franchise features a grizzled Luke Skywalker in some familiar surroundings. The late Carrie Fisher reprises her role as Leia. They're joined by a new generation of Star Wars heroes and villains.

"I expect definitely some struggle. I expect that the war between the light and the dark side is going to get a little blurred," said fan Mercedes Loeb.

"It will never get old. So long as they keep doing them every year, I'll keep coming," said fan Stewart Quarles.

As the highly-anticipated film began to hit screens, ABC7's Janet Davies chatted with the movie's villains and attempted to "force" some hints about Episode 8.

As the highly-anticipated film began to hit screens, ABC7's Janet Davies chatted with the movie's villains and attempted to "force" some hints about Episode 8.

"I am sort of good at menace and threat, and getting inside people's heads and manipulating," Serkis said.

"I think I present more of a physical threat," Christie said.

"Just a disgusting human being. That's what I am more good at," said Gleeson, who plays General Hux.

They are all quite cool at portraying the evil of the military dictatorship The First Order. But this time out the actors were taken aback by the script.

"It literally flips from being hilarious to really dark being intimate and emotional to being epic. It does, it does. It's an incredible roller coaster," said Serkis.
"It really kind of kept shocking me in a way I really just wasn't expecting. I was kind of left agape. I really needed to talk to Rian afterward; like how is this going to happen, this is amazing," Gleeson said.

Christie's Captain Phasma is commander of the Stormtroopers. Her continuing role on HBO's "Game of Thrones" demands heavy swordplay, but this film needed extra training.

"I was happily reunited with C.C. Smiff, who was the man who taught me to fight and sword fight on Game of Thrones. And I was delighted about that because C.C. has been instrumental in developing a side of my acting that I'd never really done before," she said.

And there's always a burning question: Which villain makes it to Episode 9?

"You are trying to trick us!" Serkis said.