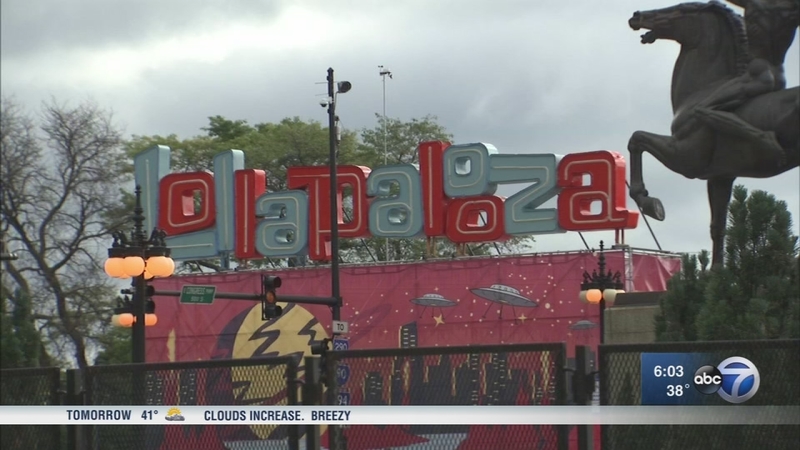 During Friday's Las Vegas police briefing on the attack, the first since October when Paddock opened fire on a concert from his hotel perch across the street killing 58 people, authorities revealed the gunman had researched Grant Park and at least two Chicago music events.

Paddock scoured the internet on May 18 for "summer concerts 2017" and "grant park functions (sic)" along with web visits to the Grant Park Music Festival website and ticketmaster.com.

Whether Paddock secured hotel rooms, rental cars or concert tickets in connection with a possible Grant Park Music Festival attack is not part of the Las Vegas police report.

However, Las Vegas authorities do put another Chicago event at the top of their list of "related indicators of intent on the part of Paddock."

They say he "had a reservation for a hotel during the Lollapalooza music festival held in Grant Park during the month of August." Lollapalooza took place between August 3-6 and "Paddock specifically requested a room overlooking the venue when he made the reservation," the police report states.

While not named in Friday's police briefing or records, the I-Team confirmed last fall that Paddock's hotel-of-choice was the Blackstone at 636 S. Michigan Ave. "The reservation was cancelled two days prior to the check-in date" according to the police report.

Officials at the FBI office in Chicago referred the I-Team to authorities in Las Vegas. When asked about a wider Chicago plot, Las Vegas Metro police investigators said that the new report speaks for itself and that there is no further information available.

Also on Friday, Las Vegas Sheriff Joe Lombardo said there are no plans to seek charges against Marilou Danley, the girlfriend of the gunman behind the Oct. 1 mass shooting in Las Vegas. Lombardo reiterated Paddock, 64, acted alone although he said there is an open FBI investigation into an unnamed person of interest. Paddock shot himself in the mouth and died after carrying out the attack and the question of motive also remains open. Las Vegas police say they don't know what drove him to rain gunfire on 22,000 outdoor concert-goers. It is the lack of a specific motive that has prompted police to consider 2,000 criminal leads and sift through thousands of hours of video, according to Lombardo.

Paddock "self-funded" the attack according to authorities "through his gambling and past real estate transactions. He was indebted to no one and in fact paid all his gambling debts off prior to the shooting."

Friday's police report, said to still be a preliminary version, includes photos of the hotel sniper's perch that Paddock built, the guns that he brought into the adjoining rooms and at least 5,280 rounds of ammunition. Authorities have concluded that he bought nearly 29 firearms between 1982 to September of 2016 - and then his behavior changed: "From October 2016 through September 2017, Paddock purchased over 55 firearms," the report states, adding that in the last year of his life, Paddock preferred rifles over the handguns and shotguns that made up the bulk of his earlier purchases.