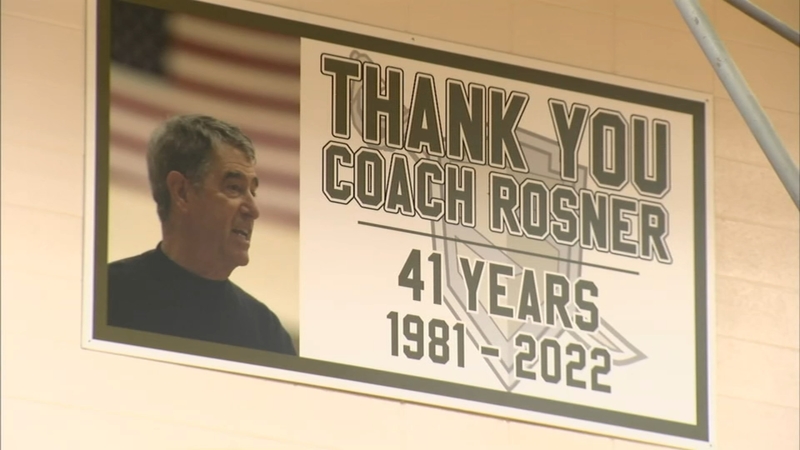 STREAMWOOD, Ill. (WLS) -- The gym at Streamwood High School has been George Rosner's home for 41 years, and now it's official: It's been renamed George Rosner Arena. The hall of fame girls basketball coach's name graces the top of the scoreboard.

"I'm stunned. I'm overwhelmed and I thank you from the absolute bottom of my heart," he said.

The school kept it secret from him, but they've been planning it for more than a year.

Dozens of former players from over the years are here to help him celebrate the start of what he said will be his final season.

Patty Zuick scored the first basket in Coach Rosner's very first game; he gave her the original scoreboard to prove it.

"Amazing. He had a good run. Good coach," she said.

The 72-year-old said his teams are like family, and like family they've stayed close over the years. The photo table in the lobby offers tributes to some of his milestones, including hundreds of game wins and multiple championships. Chris Tomasiewicz is one of many former players who was able to play in college after graduating here.

"He's had a huge impact on my life. He started coaching me when I was eight and he's still a big part of my life now," she said.

The coach's real family was also in attendance, of course. They've spent countless hours at the gym over the years, cheering for Streamwood teams and listening to the Neil Diamond songs Coach Rosner always blares through the speakers.

"To see Rosner Arena, I don't think it's sunk in yet. He's gonna think about this more and more," said his wife Kathy Rosner.

"I'm stunned by this," Coach Rosner said. "Every time I looked up there was someone I hadn't seen in ages."