VIDEO: Intruder bursts through door, gets shot by accountant 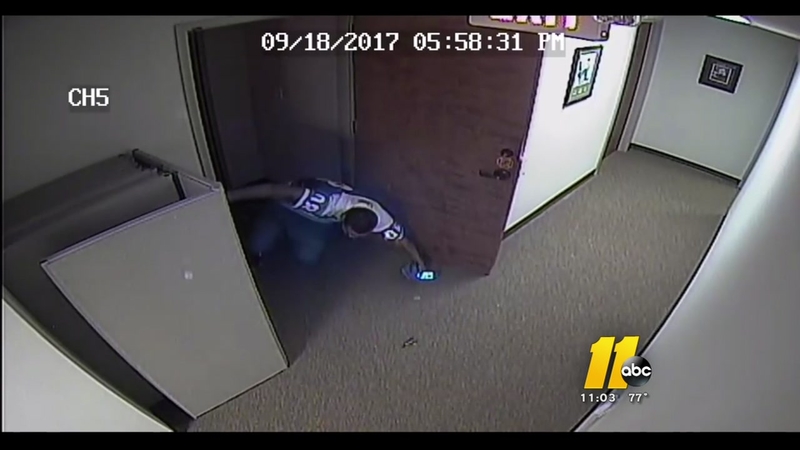 Intruder bursts through door, gets shot by accountant

Attorney Damon Chetson provided ABC with 32 seconds of video from one of the surveillance cameras inside his client's accounting office on Knightdale Boulevard.

On Sept. 18, his client, Connie Wells shot and wounded an intruder who came crashing through the door.

NEW DETAILS: Knightdale accountant shot and wounded a shoplifting suspect when he busted through her locked office door on 9/18. pic.twitter.com/Ixggm8huUy

It was just before 6 that evening when Wells was working alone in her office suite, protected by a locked office suite door that she had dead bolted.

"She hears a tremendous banging on a door," said Chetson, who provided a full written statement from Wells. "It's a 150-pound door at the opposite end of the suite."

It was 24-year old Deondre Branch on the other end of the door.

Knightdale police said officers were chasing Branch after he shoplifted 10 bras from the Walmart across the street.

They said they lost him when he ducked inside Wells' office building, where he busted through her office door.

"She screams at him to stop," Chetson said. "And when he fails to stop and ignores her screams, he's now within 10 feet of her ... She's a concealed carry permit holder. She fires a single shot at him, he falls, and she starts screaming for police."

Branch, who has a criminal history, including an assault charge against a woman, was shot just above the neck, shattering his vertebrae, according to his family.

Branch's stepfather, Willie Michener Jr., told ABC 11 that he doesn't buy Wells' claim that his stepson was dangerously close to her. He thinks she could've gotten away without firing her gun.

"The way the video makes it sound as if the door you can visually see him busting through was in her immediate space and from what we can gather it is not," Michener said.

Chetson said while his client was left traumatized, she empathizes with Branch's family. But, they aren't concerned that she could be held criminally liable.

"She exercised under the Castle Doctrine in North Carolina, her rights to self-defense," Chetson said. "She stepped back as far as she could. There was really no other option."

Michener said he is not certain Wells should be charged, but has concerns about the fairness of the investigation.

"We're fair people," he said. "We want to know what's going on. But what we're getting and what we have gathered thus far, don't add up to what they're depicting," he said.

The Knightdale Police Department said any potential charges will come from the Wake County District Attorney's Office. And, there's no timetable on the DA Lorrin Freeman's review.

Meantime, Branch remains at WakeMed Hospital, unable to move his arms and legs.