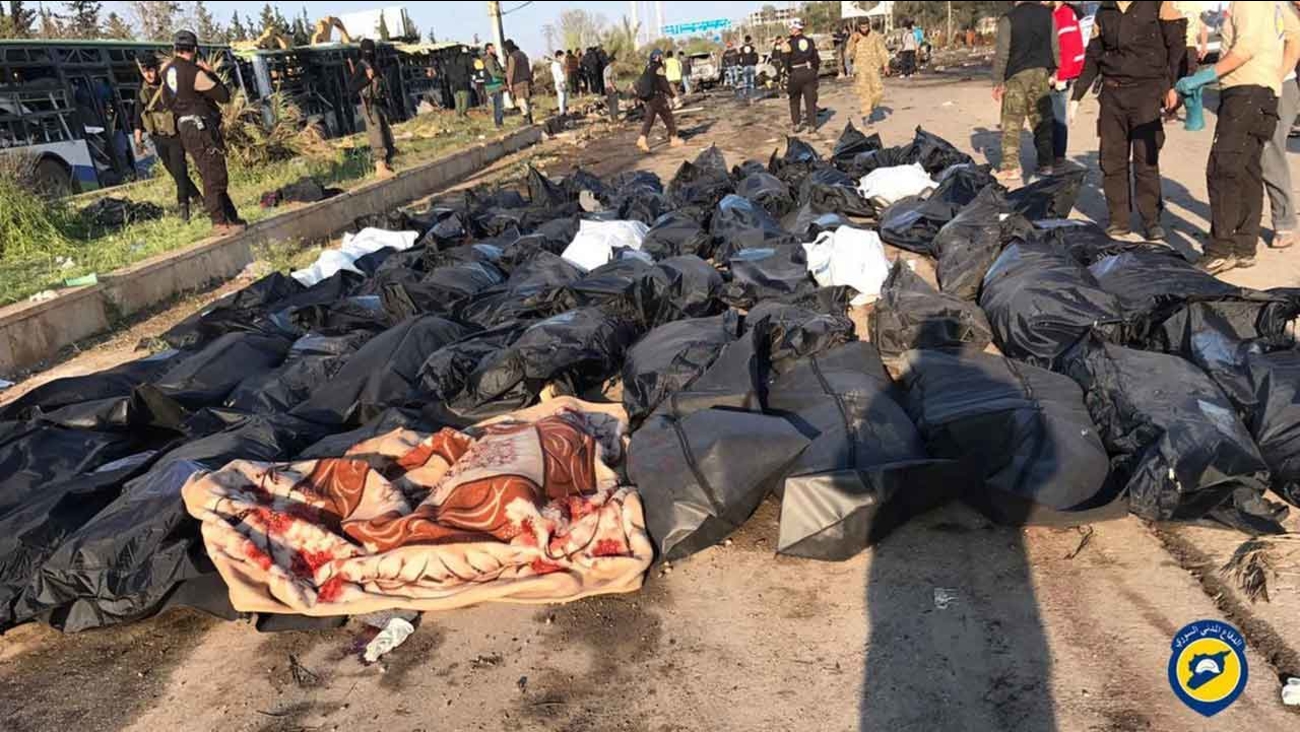 The blast, which struck buses of people who were leaving their towns as part of a rebel-regime swap, also injured 55 others in Rashidin, a suburb of Aleppo in northwestern Syria, according to Syria Civil Defense, also known the White Helmets

The convoy of buses, which were parked at the time, was carrying thousands of people from two regime-held but rebel-besieged villages in northwestern Syria, state-run media reported. People were evacuating two rebel-held towns in southwest Syria at the same time under a so-called Four Towns Agreement.

Video shown on Syrian state-run television showed heavily damaged and burned buses parked on the side of a road. People walked outside the buses, surveying the damage as well as bodies lying on the roadway and a grass median.

The evacuees, from the mainly pro-regime Shia villages of Al-Fu'ah and Kafriya, were bound for regime-held parts of Aleppo.

The state-run Syrian Arab News Agency reported the convoy continued, and the first buses arrived late Saturday in Aleppo. The buses headed to the Jebrin area for a temporary housing center equipped with food and medical supplies, SANA said.

No group has claimed responsibility.

During a televised interview, Rami Abdul Rahman, director of the Syrian Observatory for Human Rights, said a suicide bomber claimed he was carrying food items and blew himself up in a fuel station.

Abdul Rahman said he doesn't believe the Syrian regime is behind the attack. He said the regime kills scores of people daily using all types of weaponry and doesn't need to kill its own sympathizers.

The evacuees had been allowed to leave their villages this week as part of a Shia-Sunni exchange agreement between the Syrian government and insurgents who have been fighting a civil war for six years.

As part of the deal, government forces are allowing thousands of rebels and civilians to leave two towns in southwest Syria: Madaya and Zabadani, according to the London-based Syrian Observatory for Human Rights.

Madaya and Zabadani have been under the control of anti-government fighters but facing siege from forces loyal to the regime.

The rebel group Ahrar al-Sham tweeted that some of its members died in the blast. They were at the site to ensure the convoy's passage, Ahrar al-Sham said. The group said it was investigating to find out who was responsible.

The explosion happened as both sets of evacuees were stopped in separate locations outside Aleppo. Each were heading to areas controlled by forces friendly to them.

The explosives-rigged car had been packed with children's food supplies, perhaps to disguise it, a correspondent with SANA reported.

The convoy that departed Al-Fu'ah and Kafriya is carrying 5,000 people, the Syrian Observatory for Human Rights said.

Thousands were leaving Madaya and Zabadani, including more than 2,000 rebel fighters, their families and other civilians, the monitoring group said.

The deal was brokered by Iran and Qatar, Agence France-Presse reported.

A statement from the spokesperson for the U.N. Secretary-General said: "The evacuations were being conducted in accordance with the agreement reached pursuant to the Four Towns agreement. ...

"We call on the parties to ensure the safety and security of those waiting to be evacuated. Those responsible for today's attack must be brought to justice."

The Syrian American Medical Society said in a statement: "This forced displacement is a clear violation of international humanitarian law, and marks yet another sad chapter in the history of this crisis. The absence of the UN and international community from this process has left the civilian populations especially vulnerable, leading to horrific events such as what took place today.

"The UN must not abandon its role in protecting innocent civilians and enforcing international humanitarian laws."