Gasping for life: Syria's merciless war on its own children 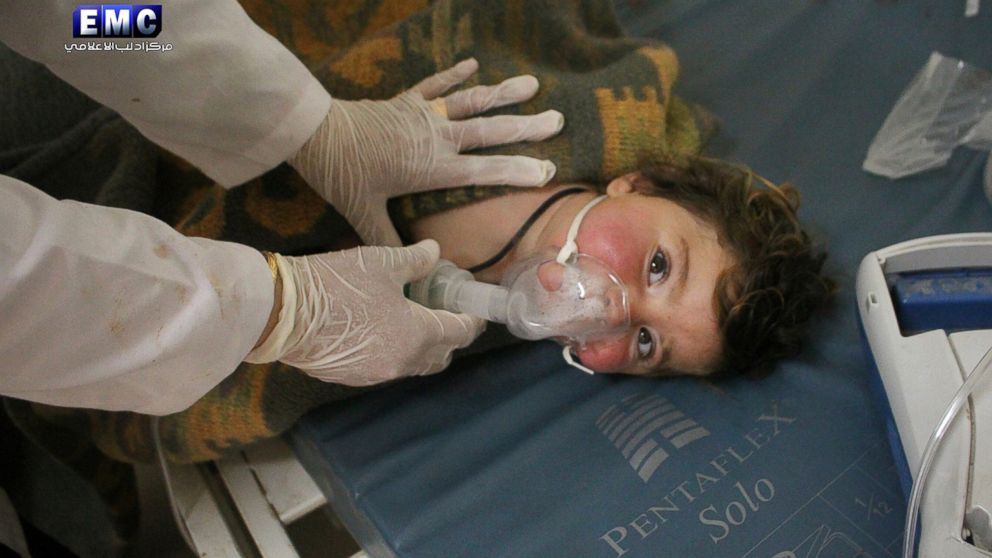 She stares off into the distance as she gasps for air, her tiny chest heaving desperately to take in more oxygen.

Her eyes are wide and unflinching, her pupils constricted, the panic behind them clear.

The little girl looks confused: she doesn't understand why she is dying, why she is lying in the back of a truck with other small children, some foaming at the mouth, others motionless, the life already gone from them.

The ground all around her is strewn with bodies, some wracked with convulsions, thrashing around in the mud as rescue workers attempt in vain to hose off the chemical agent that has blanketed them.

Minutes earlier it had been a typically cool morning in northern Syria. The people of Khan Sheikhoun would have been eating their breakfast, getting ready for school, playing outside or still sleeping.

But shortly before 7:00 a.m. on the first Tuesday in April, witnesses say government jets bombed the town, the strikes releasing a poisonous gas that would kill 92 people in all.

Video footage of the aftermath of the attack, obtained by CNN, reveals the unsanitized view of what happened that day, and it is extremely difficult to watch.

Terms like "war crimes" and "crimes against humanity" are bandied about on an almost weekly basis when it comes to Syria, abstract concepts that are often weighed down with convoluted language related to the geopolitical machinations of the conflict.

Yet when you watch these children choking on what were likely their last breaths, you understand what evil is.

I have traveled to Syria roughly a dozen times since the civil war began in 2011, and every trip brings with it fresh images of death and destruction that leave an imprint on the brain. The petrifying thud of artillery landing late into the night. The sickening wake-up call of fighter jets wheeling overhead. The frantic search for survivors in the rubble. Women wailing over their dead brothers and husbands. The blank eyes of a young boy killed in the crossfire. The solemn march of a casket to the graveyard.

But there is something particularly horrifying about the images in Khan Sheikhoun, something uniquely haunting about watching the last gasps of innocent people. Chemical weapons have been outlawed since the end of World War One. They are barbaric and inhuman, a "red line" that should never be crossed. They also make no distinction between soldiers and children.

There is no mercy, no quick death, no dignity in those last moments. The victims lose control of their faculties, froth at the mouth, and writhe around on the ground as the life drains out of them.

This is not the first time that the regime of Syrian President Bashar al-Assad has gassed its own people, or denied doing so. In 2013 a sarin attack left more than 1,400 dead, including more than 400 children, and a recent report by Human Rights Watch found that government forces have used nerve agents on at least four occasions in recent months.

But Assad didn't just deny the regime was behind the attack in Khan Sheikhoun. He denied that it happened at all, describing it as "100% a fabrication," as if anyone could fake the agonizing deaths captured in these images.

It has been clear for quite some time that the Syrian regime has no respect for human life. For six years, it has brutalized its own people in an attempt to win back control of the country.

Assad has cast the conflict as a war on terrorism. To people living in opposition-controlled areas, however, it feels more like a war on normalcy.

The message from the regime is clear: we will bomb your hospitals, your markets, your bakeries and your schools; we will kill your children, your mothers and your brothers. We will starve, imprison, torture and gas you, until it is no longer possible for any life to exist in these areas. In one Damascus suburb that was under siege, a streak of graffiti on a wall summarized the policy: "Starve or kneel (to Assad)."

The ruthless cynicism of Assad's regime, bolstered by financial and military support from Iran, Russia and the Lebanese militia Hezbollah, has left the international community horrified and paralyzed.

After the genocide in Rwanda and the massacre in Srebrenica, the United Nations promised the world "never again." But geopolitical realities have a way of smashing idealistic platitudes. The international community has failed to come to any consensus about who the guilty parties are in Syria's war and how to move forward.

The US missile strikes on the air base from where the Khan Sheikhoun attack is believed to have been launched may have served as a powerful warning. Perhaps Assad will think twice before using sarin gas again.

But the bombing hasn't stopped. Hospitals are still being targeted, and innocents are still dying. History will not be kind to world leaders for allowing the slaughter of the Syrian people to continue.

More than 20 members of the Youssef family were killed in the attack on Khan Sheikhoun. Among them was Yasser al-Youssef, a 39-year-old man who owned a supermarket and volunteered at the local mosque. Friends say Yasser, like most fathers, was very concerned about whether his children would be able to obtain a proper education in Syria.

Two of Yasser's boys, Muhammed, 12, and Amer, 4, also died in the attack. Muhammed loved to play soccer when it was safe enough to play outside, a cousin told CNN. Amer, on the other hand, preferred to chase chickens and doves around the family's property. A photograph taken in a happier time shows them hugging and smiling into the camera, Muhammed's arm wrapped protectively around his little brother.

Their mother, 36-year-old Sana Haj Ali, was killed too. A relative told CNN she was watching Amer playing outside through the window when the Syrian plane dropped its chemical payload.

Sana saw Amer fall to the ground and screamed at Yasser to rescue him. Yasser ran outside, picked up Amer and managed to climb into their car before succumbing to the effects of the gas. Sana ran out after them, and she dropped dead just outside the entrance of their home.

Sana is one of thousands of mothers who have died in Syria while trying to protect their children. Amer and Muhammed are among the thousands of innocent children who have been killed in this senseless war.