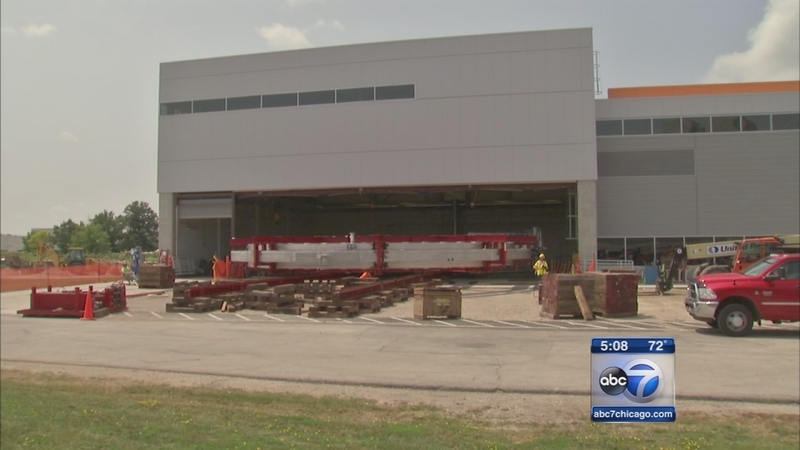 BATAVIA, Ill. (WLS) -- A massive, multimillion-dollar magnet has completed its slow journey to the Chicago area. The electromagnet is now at its new home at Fermilab in Batavia.

The super electromagnet ring is something you do not see every day. It completed its 34-day journey from Brookhaven National Laboratory in New York to its new home at Fermilab in Batavia a year ago. It was in a holding pattern on Fermilab grounds until its new home was built. On Wednesday, it moved into its new facility and the process will start to get it ready for research.

The huge electromagnet completed its attention grabbing, 3,200-mile journey from Long Island to Fermi National Accelerator Laboratory. The $30 million magnet was purchased by Fermilab for $3 million, a tenth of the cost of what it would take to build a new one.

"We will roll it in today and lower the magnet down to the sub-core of the building," said Chris Polly, project manager, Fermilab. "You have to bring a particle beam into this device. There are a couple of years once this is done before we are ready to do the science."

The science was done before at a lab in Long Island where they thought there might me a hint to new physics.

"We have the tools here at Fermilab to confirm whether or not there is new physics or not, we might change our entire understanding of the universe," said Aria Soha, installation manager, Fermilab.

Officials plan to use it in a physics experiment called the Muon G -2 Project. The experiment will study tiny subatomic particles that blink and what they mean for our future.

"Here at Fermilab we learn about the universe: how it works, what are the rules that control the universe, and if we know the rules better, than we can create better technology in order to better our lives," said Soha.

Thousands of fans followed the journey of the 50-foot wide magnet last summer as it traveled on a barge along the East Coast, up a series of rivers and finally over interstates in Illinois. Arriving to Fermilab a year ago, several students from Northern Illinois University have been working with Fermilab on the project.

"I find this project exciting because of the new physics and hopefully new particles we can discover from it and the advances that we will be making as a result of the research," said Mary Shenk, Northern Illinois University.

Fermilab scientists, technicians and engineers will now inspect its 400 or so pieces of instrumentation for damage. It will take several months before physicists know if the big move was a success. Then the work will begin to learn all about muons, and about the new physics this project may uncover and what it will mean for future generations.