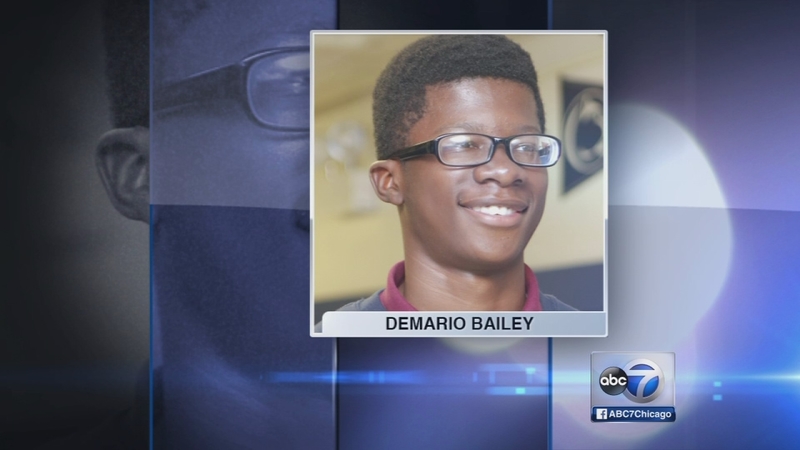 CHICAGO (WLS) -- Police are questioning persons of interest in connection with a shooting that left a 15-year-old boy dead during an apparent robbery attempt on the city's South Side.

Demario Bailey was shot and killed in front of his identical twin brother.

Family members say the teen was shot because he would not give up his coat to several people trying to rob him.

Bailey was a student at Johnson College Prep. One of his junior varsity basketball coaches says he's an angel gone too soon.

"One of the best kids in our school," said coach Robin Callahan. "Very disciplined. No problems, fun kids. Always a smile on they face. If you wanted a kid, that was one of the kids that you wanted."

Bailey was walking down the sidewalk with his brother near 63rd and State just after 12:30 p.m. Saturday when four men came up and tried to rob him. Police say at some point one of them allegedly pulled out a gun and shot Bailey in the chest.

Community activist Andrew Holmes says there's a $1,000 reward for anyone with information on the shooting.

According to family, Bailey was only three days away from his 16th birthday.

His coach and school are now devastated by his death.

"Our kids work so hard and we do so many things for them to keep them off the street, to keep them out of trouble," Callahan said. "For something like this to happen it not even just tears the school apart, it tears the community apart. "

The principal released a statement Saturday night calling for Martial Law on the South Side, saying this killing violence needs to stop.

Police are still searching for at least two other people. No charges have been filed against the two suspects in custody.