'I am sick of hearing about thoughts and prayers from my Republican colleagues,' said Rep. Mike Quigley.
WLS
By Diane Pathieu 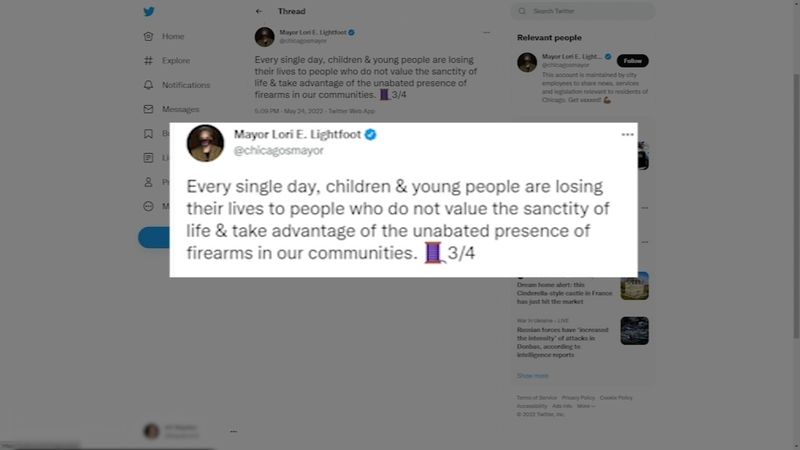 CHICAGO (WLS) -- Chicago and Illinois leaders are reacting to a deadly elementary school shooting in Texas, with some calling for gun control legislation.

Fourteen students and a teacher are dead after a shooting at Robb Elementary School in Uvalde on Tuesday, according to Texas Gov. Greg Abbott. The 18-year-old suspect, a student at Uvalde High School, is also dead, he said.

"As a nation, we simply cannot allow this to continue. Every single day, children and young people are losing their lives to people who do not value the sanctity of life and take advantage of the unabated presence of firearms in our communities," Lightfoot said, in part. "Now more than ever, we must push our legislators to pass sweeping and effective gun control measures. Our children's lives depend on it."

Democratic members of Congress also called for gun control legislation, with some lashing out at Republican colleagues.

"I am sick of hearing about thoughts and prayers from my Republican colleagues-the very same colleagues who claim to be 'pro-life' then block legislation that could save lives," Rep. Mike Quigley said in a statement. "Our children deserve better."

As a mother of two, my heart is shattered.

I will never understand how Republicans can consider NRA dollars more important than American lives.

When will enough finally be enough?

This cannot be normal. We need to take action. Now.

Sen. Dick Durbin called the shooting "heartbreaking and tragic" and asked Republicans to join him in attempts to pass gun control measures.

"I implore - beg - my Republican colleagues to join Democrats in finally making changes to our gun laws to help prevent Americans from re-living this gun tragedy far too often," Durbin said in a statement. "We cannot continue to sit on our hands and allow innocent lives to be lost. Congress must act."

Gov. JB Pritzker issued a statement on Twitter, saying his "resolve is with all Americans who are working to end senseless gun violence."

It is heartwrenching and enraging to hear the news of the elementary students and their teacher gunned down in Texas.

My prayers are with their families, and my resolve is with all Americans who are working to end senseless gun violence wherever it occurs.

My heart breaks for the families in Texas. Our children deserve better. No child, wherever they are, should have to live in a world plagued by gun violence.

I am absolutely heartbroken by the horrific tragedy in Uvalde, Texas today. No one, especially our children, should ever be a victim or a witness to gun violence. The @Chicago_Police Department joins the country in praying for every single person affected by this senseless act.

Our heartfelt condolences go out to the families of the precious children who’s lives were senselessly taken today #UvaldeTX. #ChicagoPolice https://t.co/1C2FNTFXZa

CPS CEO Pedro Martinez, who formerly was school district superintendent in San Antonio, also released a statement, saying: "The Chicago Public Schools community joins our nation in mourning the tragic loss of life after another horrific school shooting. As a former San Antonio school district superintendent, I know Uvalde well and am devastated and heartbroken for that community and those grieving families. Such acts of senseless violence can not be the norm for our schools in America. At CPS, we will continue to work closely with our public safety and community partners on the development and implementation of school safety plans. We also recognize the importance of building strong relationships with our students and each other to ensure that our schools are safe and welcoming places."

Cardinal Blase Cupich even released a strongly-worded statement, calling for more gun control measures, saying in part, "The right to bear arms will never be more important than human life. Our children have rights, too. And our elected officials have a moral duty to protect them."

But many Republicans have said restricting weapons is not the answer.

"That doesn't work; it's not effective. It doesn't prevent crime; we know what does prevent crime, which is going after felons and fugitives and those with serious mental illness, arresting them, prosecuting them when they try to illegally buy firearms, " Texas Sen. Ted Cruz said.