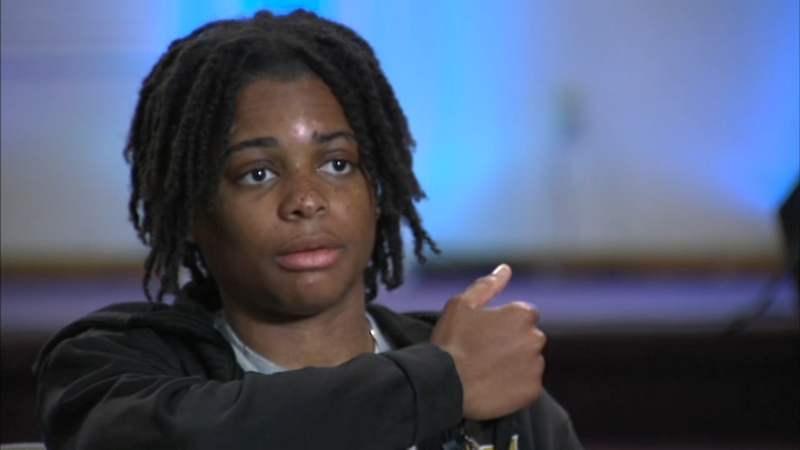 JOLIET, Ill. (WLS) -- A Quincy University student from Joliet on a full ride basketball scholarship is speaking out after being attacked and choked unconscious at a Quincy bar, which she said was racially motivated.

Jazzpher Evans still has two black eyes and scabs on her face. In her first one-on-one interview, exclusively with ABC7's Samantha Chatman, she recounted what she called the most difficult moments of her life.

Attorneys for Jazzpher Evans say the owner of a bar called "The Barn" in downtown Quincy violently attacked the young woman, beating her until she was unconscious.

The Quincy University freshman said she and a friend stopped by The Barn, which is one of a few bars near campus. She said they both went to the DJ booth to put in a song request, when the bar owner approached and grabbed her.

"He didn't even say anything to me at first," she recalled. "The first thing he did was put his hands on me. He didn't ask me to leave. He didn't ask me what I was doing by the DJ booth. His first instinct was to shove me up against the gate."

She said the bar owner cursed at her, threw her to the ground, punched her and put her in a chokehold.

She said she believes the attack was racially motivated.

"I believe he attacked me because I'm Black," said Evans. "The girl I was with is a white girl and I'm obviously African American. We were doing the exact same thing, standing in the exact same spot, and he didn't say a word to her. He literally had tunnel vision and came straight for me."

"He picked me up by my shoulders, wrapped his arm around my throat and began to strangle me," Jazzpher Evans said. Her attorneys say the attack was racially motivated.

"This is unbelievable. Why is this guy not locked up right now? Why?" said Marvin Evans, father.

Quincy police confirmed the bar's owner was involved. According to Chief Rob Copley, they have not yet found evidence of racial motivation but are investigating the possibility.

"This type of incident, that's always a concern, and we're well aware of that, and if we can come up with evidence to show that, we will," he said.

Evans' attorney Keenan Saulter said she was choked unconscious and suffered a concussion. He also said police were at the bar that night, and didn't seek medical help for Evans. He said they didn't even take her name down that night.

"I woke up, I was outside on the ground bleeding, I was crying. No one around helped me," Evans said.

"There was some police officers there and I walked over to them, and they could visibly see the abrasions and the cuts on my face, and I told them this guy had just attacked me. They didn't offer me any medical attention, they didn't ask my name," she said.

Saulter said it's time for Quincy to stand up and seek justice for this student, who was just trying to have a good time.

"Anyone who would characterize this as anything other than a felony battery is not looking at the facts," he said.

Evans said she's still healing from the attack, but has a message for the man she said did this to her.

"I would tell him that my mom loves me, my dad loves me, my community loves me. There's nothing he could ever do to break my spirit," she said.

Copley said his team is reviewing video from inside the establishment. Police are asking anyone with information or video of the incident to come forward. Click here to read a full statement from the Quincy Police Department.

ABC 7 attempted to contact the owner of The Barn in Quincy, but we were unable to reach him.