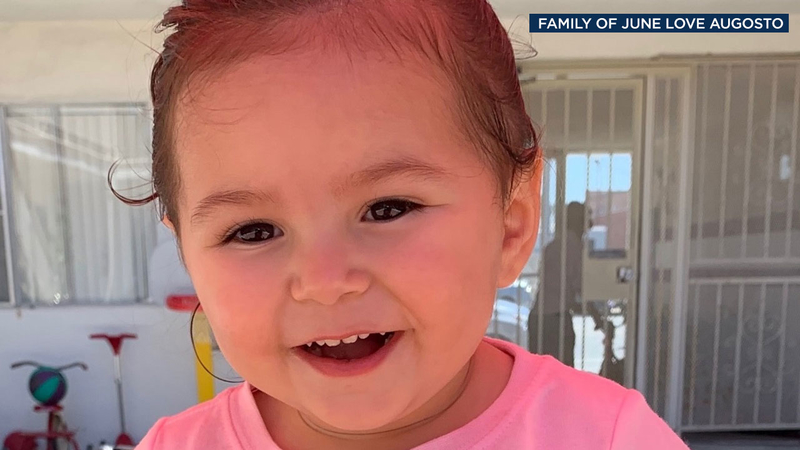 WEST CARSON, Calif. -- A 2-year-old girl died after her mother allegedly left the toddler in a car with the heat turned up for up to five hours in California. The mother is accused of being in a nearby car, drinking.

The girl has been identified as June Love Augosto.

According to a report by the Los Angeles County Coroner's Office, June's mother, identified as Lacey Mazzarella, told a sheriff's detective that around 11:30 p.m. on Sept. 22, she placed June in her car seat and turned up the heat in the car, which was parked near a residence in the 22400-block of South Vermont Avenue.

Mazzarella then allegedly left June inside that hot car and went to another vehicle nearby, where she sat and drank alcohol with a friend. At some point, Mazzarella fell asleep.

Hours later, around 5 a.m., Mazzarella awoke and went back to her car. Authorities said that's when she found June unresponsive in her car seat. The coroner's report details that June had vomit on her shirt, and skin was coming off the child's back. The toddler's body temperature was 107.5 degrees, the report says.

Mazzarella then took the child out of the car seat, placed her on a patch of grass and sprayed her with a water hose in an attempt to cool her down, the report stated. Mazzarella then took her daughter into the house on South Vermont Avenue, where a 911 call was placed. The child was later pronounced dead shortly after 6 a.m. at a local hospital.

The toddler's mother has not been taken into custody, according to authorities.

June's father, Gary Augosto, told authorities that Mazzarella has a 9-year-old child she lost custody of as a toddler due to neglect in her home state of Connecticut. That child was eventually adopted by a relative, he said.