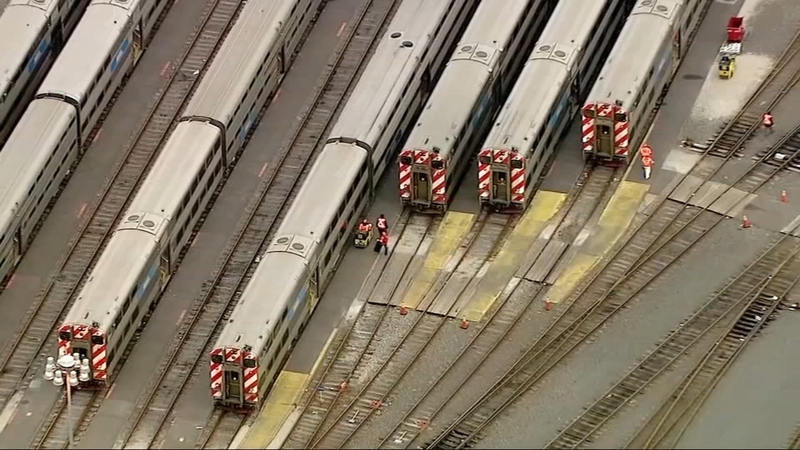 CHICAGO (WLS) -- The computer glitch that led to major delays on Metra and Amtrak at Union Station Thursday was caused by a worker falling on a circuit board, Senator Dick Durbin said after speaking with the Amtrak CEO.

Senator Durbin said the Amtrak CEO told him Amtrak decided to do a server upgrade during peak hours of service and then a worker trying to repair the problem fell and hit a circuit board.

Amtrak released a statement Friday saying the problems were the result of "human error."

The statement said, "Amtrak has completed a root cause analysis of the signal system failures yesterday at Chicago Union Station. The root cause was human error in the process of deploying a server upgrade in our technology facility that supports our dispatch control system at Chicago Union Station. We failed to provide the service that Amtrak customers, Metra commuters and the general public expect of us.

"We own the system. We will fix this problem. More importantly, we are taking steps to improve our operations in Chicago, which include appointing a veteran Amtrak executive to make sure we deliver the performance our stakeholders expect of us.

"In the meantime, we once again apologize to Metra and to everyone who was impacted by yesterday's disrupted service."

In a statement, Senator Durbin said, "I talked to Mr. Anderson this morning and in blunt terms, asked him what happened in Chicago yesterday? Why did thousands of commuters see their service interrupted? He was honest and direct, and admitted that Amtrak made a series of errors. The most important error they made was to decide to do a server upgrade to their computers during peak hours of service. This should be done in the middle of the night when only a handful of trains are running. Along with that, a worker fell on a circuit board, which turned off the computers and led to the interruption of service that went on all day long.

"Today, Amtrak issued a public apology to the people who were inconvenienced in Chicago yesterday. Mr. Anderson also told me there will be changes made when it comes to computer programming and upgrades in the future. But my job in Washington, along with Senator Tammy Duckworth, is to ensure that these federal agencies are held accountable. Amtrak failed yesterday, but I appreciate their honesty."

Senators Dick Durbin and Tammy Duckworth sent a letter to Amtrak CEO and President Richard Anderson calling for swift policy and operational changes to prevent future equipment failures. The senators also called for the full results of the agency's investigation into the system failure to be made public. Amtrak said it would respond to the letter "in a timely manner."

In a statement Friday, Metra said: "We understand and share your frustration with Thursday's signal system failure at Chicago Union Station. We tried to operate as best we could in the absence of Amtrak's signal system, but we know the delays and crowded conditions were unacceptable. As always, our passengers' safety is of primary importance. When the failure occurred, Amtrak dispatchers were no longer able to automatically control train movements in and out of Chicago Union Station. The only way to safely move trains at that point was for Amtrak employees to manually operate the signal and switching points and allow only one train at a time to move. This is why our customers may have seen another train move while the one they were on sat at the platform or outside the station with extensive delays.

While we are pleased Amtrak is taking responsibility and admitting human error was the cause of the signal system failure (see Amtrak statement below), we remain deeply troubled by this event. We are working closely with Amtrak to understand what happened and we have told Amtrak officials that we expect them to take immediate action to prevent any recurrence of this incident."

Metra and Amtrak were operating with normal service Friday, a day after major signal problems brought travel to a standstill for 12 hours at Chicago Union Station.

Railroad tracks turned into a parking lot for dozens of trains, some with passengers stuck onboard for hours.

The problems started at 8:30 a.m. Thursday. There was a communication issue between Amtrak's computer system and the signal switches at Union Station that halted all train movement, affecting both Amtrak and Metra.

An Amtrak spokesperson provided an update on the situation at Union Station Thursday afternoon.

It was a domino effect and commuters were stranded for hours while crews worked to fix the glitch.

"In my time, which is now which his now about 18 years...I've not seen a signal and control system of this duration," said Amtrak spokesman Marc Magliari.

Metra warned commuters there would be extensive delays, but no one expected the problems to last over 12 hours.

Bibiana Bol is from Kansas City and was heading to a modeling job in Rockford. She had never been on a train before and was still stranded in Chicago Friday morning.

"I am always known as being punctual so they are going to be shook that I'm not going to be there because this is very important, this is a friend's magazine that I'm supposed to represent and she has a big show coming up so for me, I feel bad because I feel like I let her down," she said.

Trains were able to move once again when crews started to manually operate the switches. The system was back in service at around 8:45 p.m.