Paraplegic football coach claims to have been forced to scoot down aisle, off of United flight 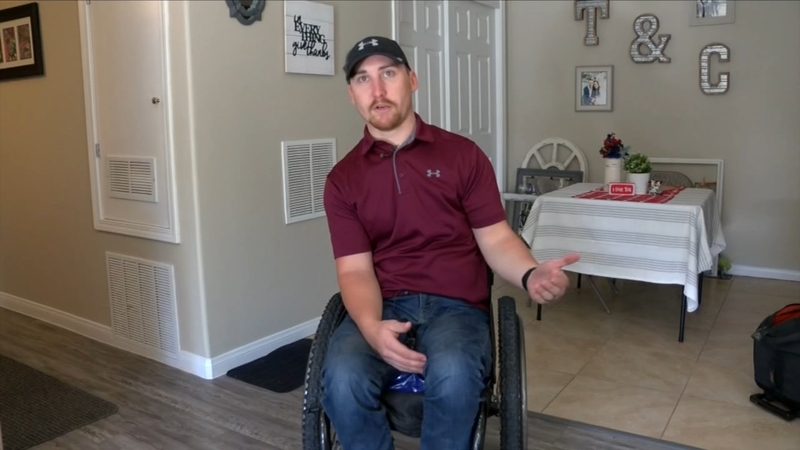 Paraplegic football coach claims to have been forced to scoot down aisle, off of United flight

BAKERSFIELD, Calif. -- A paraplegic high school football coach from California is claiming he had to scoot down the aisle of a United Airlines plane in order to make his flight because the airline failed to provide proper accommodation.

He is paralyzed from the waist down following an ATV accident from more than eight years ago.

Schilhabel told 23ABC, he and his wife Courtney were traveling via United Airlines to the Dominican Republic for their honeymoon.

The flight began in Los Angeles with a connection in Chicago.

According to Schilhabel, he had to scoot down the aisle "on his butt" and then had to hop down "step by step" to get to his wheelchair.

Following the honeymoon, on the couple's connecting flight in Chicago, he says United Airlines also did not have an aisle chair.

This time, Schilhabel says he and his wife had seats in the back of the plane.

"So I scooted on my bottom all 31 rows to the front of the plane, got on my chair, got through customs and we were able to make our connecting flight," he said.

According to the U.S. Department of Transportation, depending on the type of disability related need, passengers may be required to ask for specific accommodations 24 hours in advance or check in one hour before standard check in time for the flight.

However, Schilhabel says he notified the airline with plenty of time.

"When I make all of my reservations for my flights I put on the notes that I require an aisle chair and a ramp and elevator at all arrivals and destinations, and I make it a point to get there even earlier before anybody else so that I can talk to whomever is at the front desk to let them know once again," explained Schilhabel.

Both Schilhabel and his wife received a $1,000 flight voucher from United Airlines as well as an apology. However, Schilhabel says he will not accept the vouchers because he does not want to travel with United Airlines.

"It not necessarily about the money or getting anything in return, it's just the fact that people have been treated like this on multiple occasions not just myself, and it seems like they haven't done anything to fix it," he said.

When reached for comment, United Airlines released the following statement: