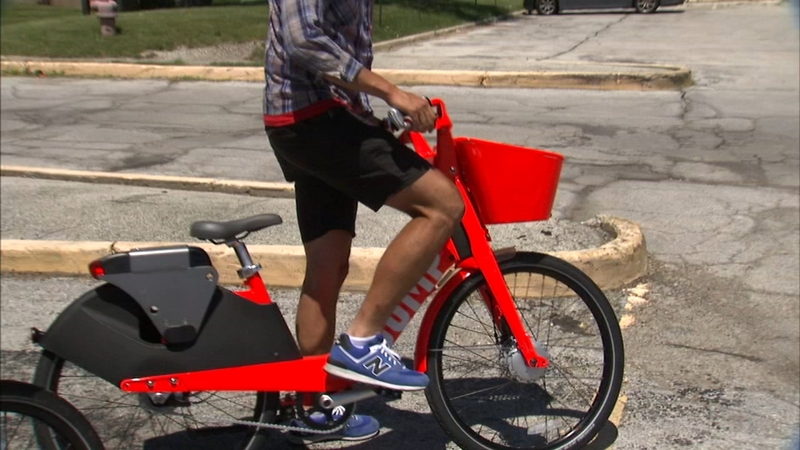 CHICAGO (WLS) -- Uber rolled out a new option for getting around in Chicago Monday: dockless electric jump bikes that are now available for rent on the city's South Side.

Some think it's a great idea, but other are opposed to the new service.

The bright red bikes will soon be spotted in neighborhoods like Chatham, Roseland, Pullman and Beverly. They are the latest addition to the bike share craze, with a twist.

JUMP is an electric bike that gives you a boost to cover more ground with every pedal. Some residents are excited for a new option for transportation.

"I think it's a positive for the 9th Ward, and I wish the 9th Ward success because there are a lot of people who could really benefit from having a bike and riding it. I wish the price was a little less but I think it is a service people can use," said Bernadette Tucker, Pullman resident

Bikes can be located using the JUMP app or your Uber app. After you're finished with your ride, dock at the nearest bike rack, retired parking meter, or street sign.

But with the new technology and excitement comes some criticism. Alderman Anthony Beale (Ward 9) sees it as a second-hand option to DIVVY, and a possible blight to the community.

"This is something to try to satisfy the Far South Side, to fill a void that Divvy refuses to fill. So that's what this is. If they are going to compete, let them compete across the entire city. I don't think you're going to want this second-hand knock off or leave a bike anywhere downtown, because bikes would be everywhere. So we want the same treatment that they are giving to the rest of the city," Beale said.

ABC7 gave people the chance to take a spin and see for themselves, but there was still no consensus among community members.

"I just think it's not a good idea. Like, I've heard bikes are going to be everywhere. I think that people will ride them, won't lock up and leave them," said Lisa Sparks, work in the Roseland area.

"I think it's a wonderful program. It gives people exercise and transportation to get from one location to another," said Lashayne Barnett, Lynwood resident.

JUMP costs $2 for 30 minutes. A requirement by the City of Chicago gives non-smartphone users an option to pay cash to grab a bike at participating vendors.