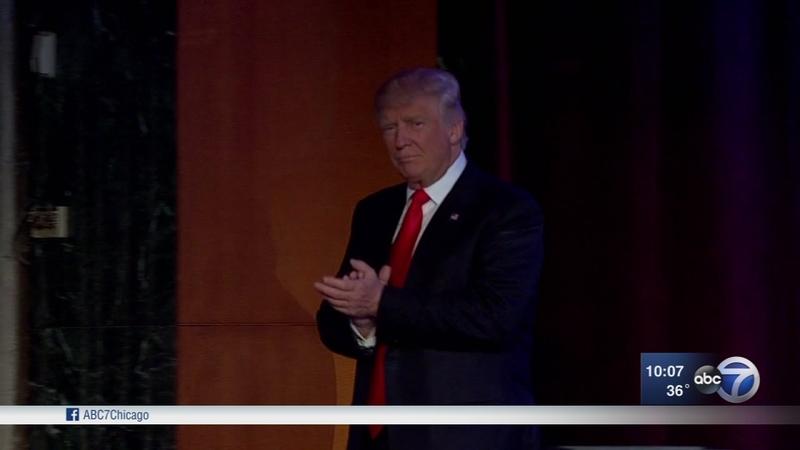 No confirmation for Trump visit to Chicago, protest planned

CHICAGO -- The Chicago Tribune published a report saying Donald Trump will stay at his hotel in Chicago on Thursday, Friday and/or Saturday during his thank you tour, but officials have not confirmed that report.

Trump confirmed on Twitter that he will be in Indiana and Ohio as part of that thank you tour, but whether he intends to stay at his property in Chicago is unclear. ABC News has not confirmed those plans and neither have the Chicago Police Department. The Secret Service told the ABC7 I-Team that "they're not preparing for a Trump visit to Chicago at this time."

Still, a protest is already planned outside Trump Tower Thursday at 5 p.m. There are still reminders of past protests; metal barricades remain in place, surrounding the building.

The notice for the protest was sent out Wednesday afternoon. Trump Tower has been ground zero for Trump since he was elected. Protesters upset with his victory and opposed to his policies have used the hotel as a rallying point, a location to gather and voice their opposition.

Chicago has been a volatile stop for Trump since before the election. Back in March, he canceled a rally at the UIC Pavillion after thousands showed up to protest, citing "safety concerns."

Scuffles between protester and supporters ensued. Police arrested five people, and two officers suffered minor injuries including one officer who was hit in the head with a bottle and required stitches.

Shortly after 5 p.m. Wednesday, the Tribune walked back its report about Trump's visit, saying the police now told them the visit is off. The groups organizing the protest said the protest will continue.

"And if he's not coming, we're going to have a celebration and we're going to send a message to the president-elect that Chicago is not a place he come to without protest," said John Beacham, ANSWER Chicago.