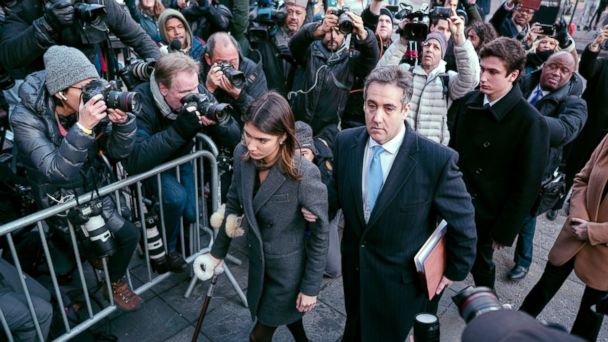 In his first reaction since his longtime personal -- and now former-- attorney and fixer was sentenced Wednesday to three years in prison for crimes committed while working for him, President Donald Trump again attempted to distance himself, repeating legal arguments and saying he "never directed Michael Cohen to break the law," contrary to what federal prosecutors contend.

"He was a lawyer and he is supposed to know the law. It is called 'advice of counsel,' and a lawyer has great liability if a mistake is made. That is why they get paid," Trump said in an early morning series of tweets on Thursday.

The president expanded on his tweets in an interview later in the morning with Fox News anchor Harris Faulkner.

"Whatever he did he did on his own, he's a lawyer, a lawyer who represents a client is supposed to do the right thing - that's why you pay them a lot of money," Trump said.

A federal judge in Manhattan sentenced Cohen for multiple crimes, including campaign finance violations, despite the president's tweeted assertion that "this was not campaign finance." Cohen was also found guilty of tax evasion and lying to Congress.

The campaign finance violations stemmed from hush money payments Cohen made to two women who alleged affairs with then-candidate Trump, which prosecutors and Cohen alleged in court documents that Trump directed. Though the payments were made with the intent to influence the outcome of the election, prosecutors said, they weren't disclosed as such.

The president said he'd never "directed" Cohen to "break the law" and said liability fell to Cohen "if a mistake is made."

Federal prosecutors contend Cohen did not make a mistake and had the requisite knowledge of the law, as federal election laws require proof that violations were committed knowingly and willfully.

But Trump in his Thursday interview came prepped with multiple clips from commentators who have argued that Cohen's actions didn't amount to campaign finance violations and that Trump similarly shouldn't face legal jeopardy.

Trump also claimed that the campaign finance charges Cohen pled guilty to were only intended to "embarrass" the president, and sought to downplay his relationship to his former fixer and personal lawyer.

"He did very low-level work," Trump said. "He did more public relations than he did law."

Prosecutors in the Justice Department's Southern District of New York charged Cohen with eight felony counts in August, including tax evasion, making false statements to a financial institution, and campaign finance violations. Special counsel Robert Mueller, tasked with investigating Russian interference in the 2016 presidential election, tacked on an additional count of lying to Congress last month. Cohen pleaded guilty to all nine counts and struck a deal to cooperate with ongoing investigations.

Hours after Cohen was sentenced Wednesday, prosecutors in the Southern District of New York announced they'd also reached an agreement with American Media Company, Inc. (AMI), the publisher of the National Enquirer, in connection with the $150,000 payment made to Karen McDougal, a former Playboy Playmate.

In the agreement between prosecutors and AMI, which was signed on Sept. 20 and made public Wednesday, "AMI further admitted that its principal purpose in making the payment was to suppress the woman's story so as to prevent it from influencing the election," the press release read.

But Trump in his interview claimed he wasn't aware of any payment made to A.M.I. to facilitate the alleged hush agreement.

Through the deal McDougal made with AMI, she transferred to the company the rights to her story of an alleged 10-month romantic affair with Trump in 2006. Trump has denied that the affair took place.
Report a correction or typo
Related topics:
abc newsnational
Copyright © 2020 ABC News Internet Ventures.
More Videos
From CNN Newsource affiliates
TOP STORIES