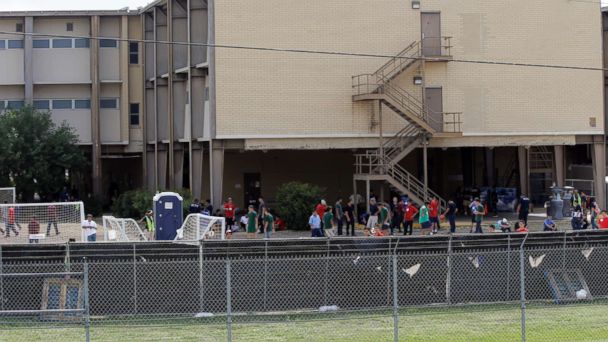 Officials from the Department of Health and Human Services are visiting four U.S. military bases in Texas and Arkansas that could be used as additional facilities to house immigrant children forcibly separated from their mothers and fathers - as the parents face prosecution for illegally entering the United States.

HHS has not made a formal request of the Department of Defense for use of the facilities, but the informal visits show that federal agencies are preparing for the Trump administration's plans to prosecute all immigrant adults who enter the country illegally.

In early May, the Trump administration announced that all adults detained at the border for crossing into the United States illegally would be prosecuted by the Justice Department, including parents who bring their children with them.

The planned increase in prosecutions will send parents to detention facilities run by the Department of Homeland Security while their children would go to holding facilities administered by the Department of Health and Human Services. HHS is the federal agency tasked with providing foster care to unaccompanied minors until they are placed with adult relatives.

The anticipated increase in prosecutions likely means HHS facilities used to house unaccompanied minors could be stretched to maximum capacity.

The Pentagon has not received an official request from HHS to provide some of its facilities to house unaccompanied children.

But a defense official acknowledges that a team of HHS officials is visiting four military bases to see if some of their facilities are appropriate for their needs to house immigrant children who are separated from their parents.

The HHS team will decide if some or all of the four military facilities meet their requirements for potential future use.

A statement from the HHS Administration for Children and Families said the office routinely evaluates "the needs and capacity of an existing network of approximately 100 shelters in 14 states."

"Additional properties with existing infrastructure are routinely being identified and evaluated by federal agencies as potential locations for temporary sheltering," said the statement.

On Tuesday, DHS Secretary Kirstjen Nielsen faced tough questioning on Capitol Hill from senators concerned about the administration's plans. But Nielsen put the onus on parents choosing to bring their children illegally across the border.

"My decision has been that anyone who breaks the law will be prosecuted," Nielsen told the Senate Homeland Security and Governmental Affairs Committee.

"If you're a parent or you're a single person or you happen to have a family, if you cross between the ports of entry, we will refer you for prosecution. You've broken U.S. law."