The incredible story behind these 'twinblings,' born 5 weeks apart 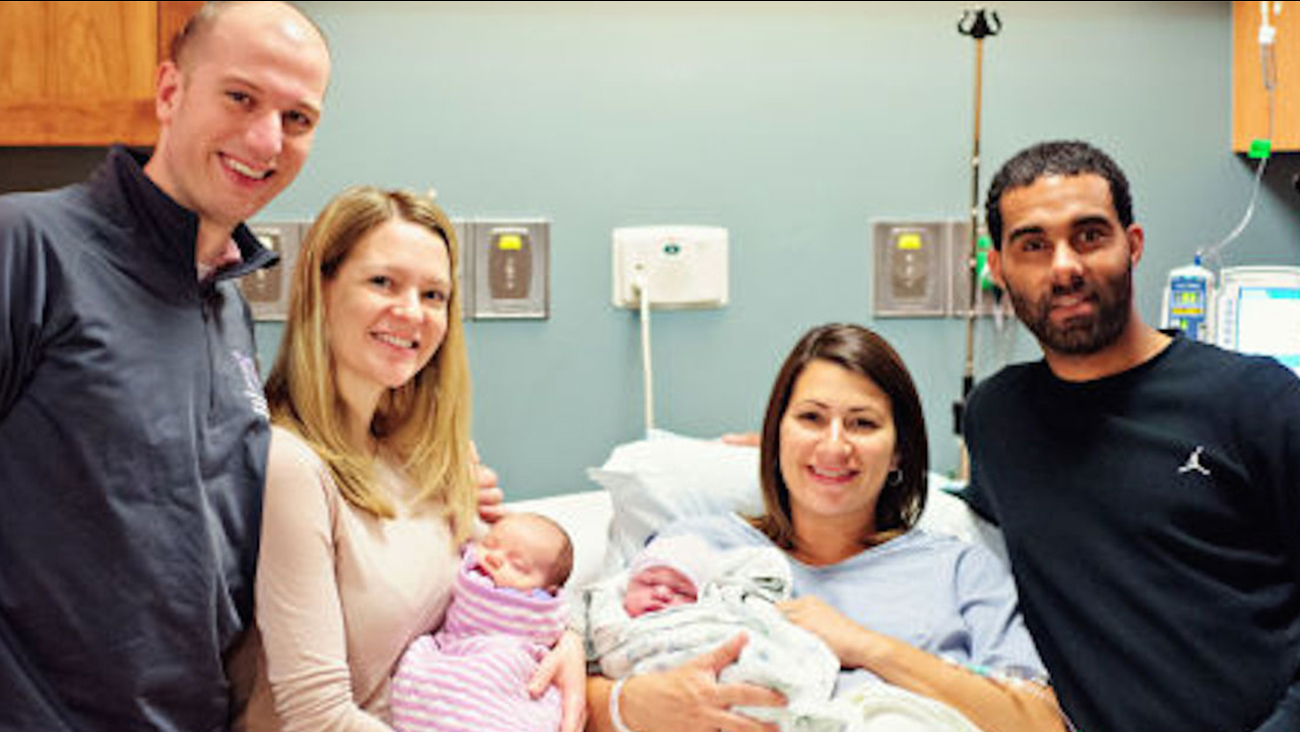 This story first appeared on Babble and is reprinted with permission.

After struggling for years with infertility and a number of failed IVF attempts, Nancy and Justin Rohde felt that surrogacy could be their best bet to finally become parents. But when their first surrogate pregnancy ended in miscarriage and their surrogate didn't want to try again, even that started to seem like a dead end. But little did the couple know that they'd soon be in for, well, double what they'd originally bargained: not only did their second surrogate get pregnant, but Nancy did too, five weeks prior.

The Rohdes shared their incredible story with Cosmopolitan this week, and with the help of their surrogate, Ashley Brown, and her husband Josh, they documented the months leading up to both women's deliveries. Although Nancy and Justin were on the verge of becoming parents to two infants, just like any other couple expecting twins, the unusual difference was that their daughters were going to be born in two different states. By two different women. More than a month apart.

Speaking with Cosmo, Nancy and Ashley discussed their extraordinary simultaneous pregnancies, which, unsurprisingly, were filled with lots of complex emotions. Like many women who've experienced difficulty getting or staying pregnant, Nancy shared her anxieties surrounding her pregnancy, and fears about whether she'd be able to stay pregnant given her history. And despite the incredible possibility that she and her husband could soon have two healthy babies, she also admitted that she struggled to feel the kind of unbridled joy people seemed to expect from her. She told Cosmopolitan:

"We had the baby shower a few weeks ago, and a lot of people expected me to be obscenely happy that our luck has changed. One of the people that attended expressed to Justin, 'I thought Nancy would be more joyful.' It feels sometimes like people think that I should only be ecstatic, which I am, but I don't think they realize all the anxiety that goes with this."

Ashley, on the other hand, refuted the common misconception that she must be struggling to keep herself from getting too attached to the baby she was carrying. "I went into it knowing it's not mine," she explained. "It's really different from my own pregnancies."

Nancy and Justin welcomed their first daughter, Lillian Quinn, into the world on May 2 in their hometown of Chicago, Illinois, while Ashley was 35 weeks pregnant with their second child in Salt Lake City, Utah. Though the news of Lillian's arrival was exciting, Ashley admitted that the pressure of wanting to deliver a healthy baby for someone else was starting to weigh on her.

"I was more emotional leading up to Nancy's delivery than any of mine," she explained. "I was just so excited and nervous for her. When I got the text that Lillian was here, it was like, 'OK, one healthy baby down, I got to get them the second.'"

Despite a long and difficult delivery, Ashley was able to do just that a little over a month later, when she gave birth to the Rohdes' second daughter, Audrey Eleanor, on June 7. And though the two couples had spent lots of time along the way discussing the details of how that day would go - Ashley didn't want to hold the baby right away, and Nancy wanted to be there to provide skin-to-skin contact for the infant -- it did still get pretty emotional. Even though Ashley had been consistently adamant about remaining detached, it's hard to fight biology, and the inevitable rush of hormones (something almost all women who have ever delivered a baby can likely attest to) still hit her hard.

"Delivering a warm, squishy baby is one of the best feelings in the world," Ashley explained. "You are on such a high, and filled with happiness and relief. She could have been mine, you know? At the same time, I was like, "Can they see her? Are they close enough?"

Following Audrey's birth, Nancy, Justin, and the girls (who they adorably refer to as the "twinblings") spent a week in Utah before heading back to Chicago to settle into their new life as a family of four. As for Ashley, she tells Babble that her life after surrogacy is "as normal as it has ever been," with the exception that she and her family now have "some fun, cute baby pictures to look at of Audrey and her big sis Lillian." From the sounds of it, the unconventional arrangement worked out beautifully -- Ashley says that being a surrogate for Nancy and Justin "could not have gone better," and that the the experience was hugely positive.

"Justin and Nancy have been amazing throughout this whole process. They are so knowledgeable, thoughtful and so giving. I would say it was such a blessing to them and me that it went so smoothly after their long struggle to get to where they are at now. I am so happy for them and their sweet girls, they deserve everything!"

So how does it feel now that their amazing story has been shared so openly? Pretty cool, according to Ashley.

"The responses to our surrogacy journey shared through Cosmo have been so overwhelming, in such a great way. I just emailed Nancy the other day about all the attention since the article has come out. I am so happy and blessed to have been matched with such an amazing couple. I know they are beyond happy with their girls and to also share such a successful, happy journey."

It may have taken Nancy and Justin years of trying (and an awful lot of heartbreak) in order to have children, but it definitely sounds like they've found a pretty remarkable happy ending filled with twice the love (and a pretty special friendship, too).

More from Babble:
The Powerful Story Behind Those Viral Surrogacy Birth Photos
Mom's Beautiful Miscarriage Tattoo Honors Baby That "Wasn't Meant to Be"
This Mom Photographed the Birth of Her Rainbows Baby and the Results Are Breathtaking