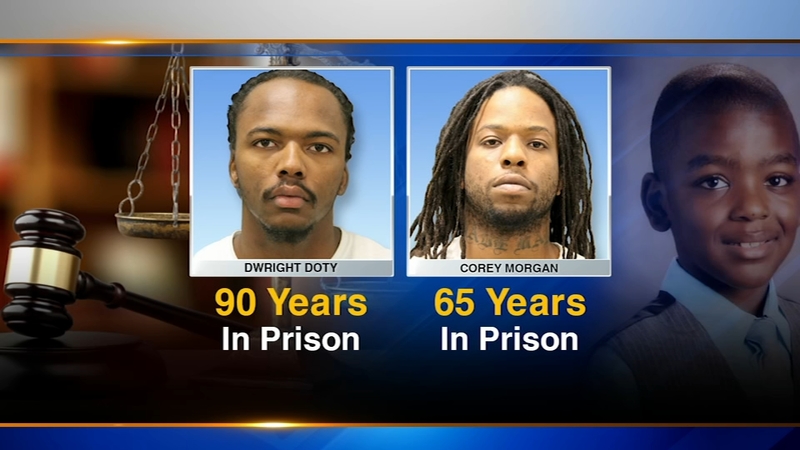 CHICAGO (WLS) -- Two men were sentenced on Wednesday to decades in prison for the 2015 death of 9-year-old Tyshawn Lee, who was shot after being lured into a Chicago alley.

Last October, Dwright Boone-Doty and Corey Morgan were both convicted by separate juries in the fatal shooting of Tyshawn.

Prosecutors said the two men lured Lee into a South Side alley near Dawes Park and that Boone-Doty shot the boy at close range, while Morgan watched in a nearby getaway car with a third man.

"I've been waiting for this day for four years," said Karla Lee, Tyshawn's mother. "I'm happy. My son got what he deserved. It's justice."

On Wednesday, Cook County State's Attorney Kim Foxx said the case "has rocked all of us in the city and around the nation with it's heinous nature."

Defense attorneys said Morgan and Boone-Doty are victims of their upbringing. They were raised in the same neighborhood without fathers. Their attorneys argued for minimum sentences.

Morgan's attorney Thomas Breen said, "There is no purpose, not one purpose has been served by the killing of Tyshawn Lee. Nothing. Lives have been destroyed. Lives will now be spent behind bars and for what?"

Judge Thaddeus Wilson said there is no excuse for the crime, calling it debilitating, mind-numbing violence.

When Wilson asked the defendants if they wanted to address the court, each man declined.

Tyshawn's family said the murder has changed their lives forever.